A week before the Fed meeting, the dollar is weakening

The past week has increased concerns about the steady growth of the US economy and the ability of the Fed to keep its plan for tightening monetary policy for 2019.

In addition to the growth of the budget deficit and the slowdown in consumer inflation, it was found that the growth rate of retail sales in August fell to a minimum, the growth was only 0.1% against 0.7% in July, which in the end indicates a slowdown in consumer demand. Despite the fact that the consumer confidence index from the University of Michigan grew from 96.2 to 100.8p, more and more data indicate that consumer optimism is largely based on positive expectations, and not on positive changes.

The “Sacred Cow” of the Fed, the Phillips curve, is before a serious test of adequacy. For many years, the Fed has come to the assumption that the growth of the labor market leads to a rise in wages, which in turn stimulates consumer demand and overall economic growth. Quite a logical chain, which, nevertheless, does not work in the current conditions at all, which indicates the presence of additional factors that change the whole picture.

The report of the Ministry of Labor a week earlier showed that the average wage growth in August was 2.9%. This is the strongest indicator for 10 years, which, according to Phillips’s formula, should lead to an increase in consumer inflation, but as a result, everything turned out exactly the opposite, inflation showed a slowdown in growth. 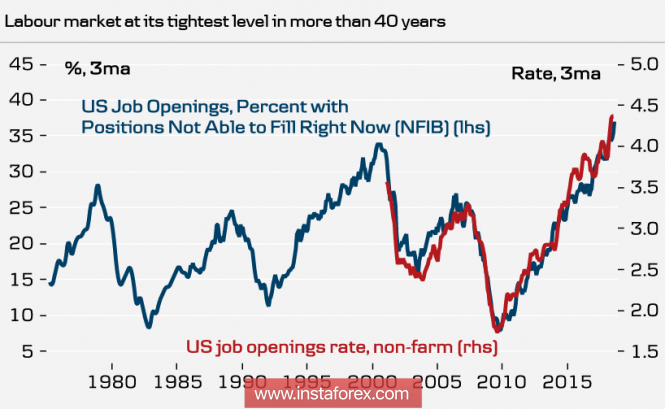 Unemployment at the lowest levels since the crisis began, it is unlikely that the growth of new jobs will be maintained at a high level, and labor productivity continues to grow more slowly than before the crisis. This ultimately means that the recent growth in consumer demand is just a response to a reduction in the tax burden, rather than an answer to positive changes in the economy. The positive momentum may end much earlier than the markets expect.

At the moment, the markets have no doubt that the Fed will raise the rate at the meeting on September 26 and again in December. However, relative to 2019, the situation can change significantly if the Fed has no reason to support the forecast for inflation and GDP growth rates, but it is precisely this. At the moment, the probability of a rate hike in March 2019 is approaching 50%, which allows the dollar to hold positions against G10 currencies, but confidence is gradually declining.

On Thursday, Trump announced that he could again raise import duties from China in the near future, on Friday this statement was confirmed by the administration of the White House. Markets reacted more calmly than they could, as there were rumors that duties would be raised not by 25%, as announced, but only by 10%, and only if China does not make concessions, their level will be brought to the original announced.

China is not going to make concessions in any way. In the case of imposing duties, negotiations cannot take place at all, and the Chinese side will take a number of asymmetric measures, which are painful for the United States. In particular, it may be about increasing duties on raw materials and components for US companies that have production in China, that is, worsen their competitiveness due to rising costs. This step will be very sensitive to the US and will show the apparent futility of any form of pressure.

The dollar feels insecure at the beginning of the week. On Tuesday, the US Treasury will publish a report on the movement of foreign capital, a decrease in capital inflows may deprive bulls of confidence in the dollar, on Wednesday there will be a report on the current operating balance for the 2nd quarter, which may also show a deterioration.

The currency pair EUR / USD on Monday has a propensity for growth, the euro will move to 1.1720 and will try to gain a foothold higher. Today there will be data on consumer inflation, forecasts are more optimistic than neutral, the euro can get support.

The currency pair GBP / USD will be more likely to trade in the sideways range, until Wednesday significant economic publications are not expected, the Brexit factor also does not yet provide direction.