All attention to Jackson Hole

Disappointing statistics from the US did not allow the dollar to strengthen on the opening day of the symposium in Jackson Hole. Sales of new homes in August fell by 1.7% compared to July, while experts expected growth. The level of business activity of the Federal Reserve Bank of Kansas fell sharply from 22p. up to 10p, repeating the trajectory of a similar indicator of Philadelphia, which may indicate a slowdown in activity across the country.

Markit confirms this conclusion – the growth of activity in the services sector, and in the industrial sector is slowing down. Lower August figures compared to July indicate GDP growth at the end of the year in the region of 2.5%, not 3.0%, as was supposed a month ago, the figures for hiring labor and on unfinished orders are decreasing, companies report an expansion of actions to cut expenses . In general, the conclusion is confirmed that the US economy is preparing to slow down this fall.

Trade talks between the US and China ended, it seems, to no avail, the escalation of the trade war is almost inevitable.

Today the key event of the day is the appearance in the Jackson-Hole of Fed Chairman Jerome Powell. The tribune of the symposium has traditionally been used by the heads of the world’s leading CB to explain its position regarding the regulation of monetary policy, and sometimes leads to serious movements in the markets. Also pay attention to the July report on orders for durable goods, with a high probability, it will also show a decrease in activity and may provoke a sell-off of the dollar.

The PMI Markit indexes for the eurozone in August look even slightly higher than for the US, at any rate, it is not expected that GDP growth will slow down by the end of the year. In conjunction with the start of the ECB’s exit from a soft monetary policy, the equalization of inflation and GDP growth between the US and the euro zone is clearly in favor of the euro, which has been under pressure for quite some time.

Some concern may be caused by the slowdown in consumer confidence, which the European Commission has noted since the beginning of the year, but this is quite natural, with a change in monetary policy and in the near future will not exert appreciable pressure on the euro.

In anticipation of news from Jackson Hole, the euro is trading in a range, during the day, an attempt to storm resistance 1.1620 is possible, but for its successful implementation, a new stimulus is needed, which is not yet available.

In the absence of significant macroeconomic news this week, the pound is under pressure due to the growing threat of a “hard” Brexit, as the positions of the UK and EU on a number of key issues remain different, and by the October summit, the parties risk coming without any preliminary agreements.

At the same time direct losses of the budget, according to the head of the British Ministry of Finance Philip Hammond, can reach up to 100 billion pounds within 10 years. Now there is no threat to the budget, the current account deficit is 3.4% of GDP and is decreasing, but indirect losses can increase significantly in the near future.

In the quarterly inflation report, the Bank of England points to a noticeable slowdown in investment in business. Both large and small businesses after the referendum in 2016 reduce activity, while business proceeds from the fact that the deal will still be concluded. If, however, no agreement is reached, lending will go to the negative zone, which in the end will not allow the Bank of England to move to a policy of normalization. 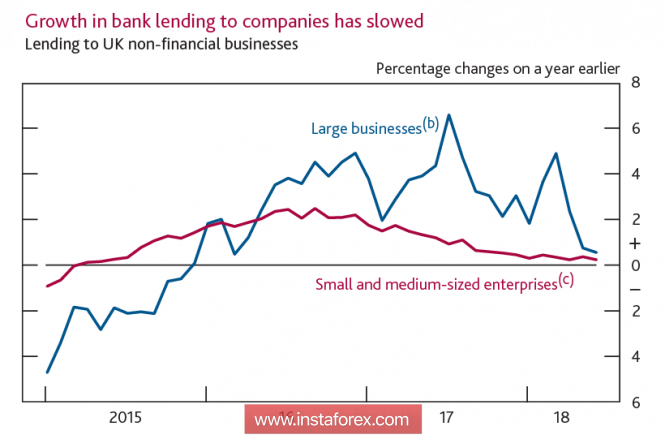 In May, BoE proceeded from the fact that Brexit is becoming an increasingly less important factor hampering the growth of investments in business, it was to this conclusion that a group of bank experts came. However, now the threat of a tough Brexit again becomes the main threat to investment growth, and hence, to the plans of the Bank of England.

All these factors lead to a reassessment of risks for the pound and will contribute to its further reduction. Today the pound is trading in the range, the probability of testing the high at 1.2935 is low, but as of the end of the week GBPUS will go below 1.2800.