AUD / USD. Devaluation of the yuan pulls the Aussie to the bottom

During the Asian session, the Australian dollar again tested the 70th figure after an unsuccessful attempt in early October. However, today “Aussie” failed to enter the 69th figure, but the general mood for the pair remains bearish. The Aussie came under strong pressure after a decline in the commodity market and an unexpected weakening of the yuan, which paired up with the dollar again began to approach the historical highs, trading now in the 6.96 area.

China is the main trading partner of Australia, so the problems of the Chinese economy are automatically reflected in the quotations of the pair AUD / USD. The latest releases indicate a slowdown in the key economic indicators of the Middle Kingdom. Thus, China’s GDP in the third quarter slowed to 6.7%, returning to the 2016 level. The growth rate of industrial production sank more strongly. The release turned out to be worse than expected, as the figure dropped to the lows of 2009 (5.8%). For the first time in 9 years, the indicator fell below the 6% mark.

The slowdown in economic growth in general, and industrial production in particular, forces Beijing to ease monetary policy conditions and devalue the national currency. The People’s Bank of China recently announced that mandatory reserve requirements for banks will be reduced. In addition, the yuan exchange rate paired with the dollar “slowly but surely” creeps up, approaching the key mark of 7.00.

The devaluation of the yuan is the anger of the White House, although literally at the end of last week, the Premier of the State Council of China assured that Beijing would not resort to a competitive devaluation of the national currency. It is difficult to say how his words correspond to reality. On the one hand, some American politicians declare that the PRC deliberately reduces the price of the national currency in order to level (as far as possible) the effect of new duties. On the other hand, Washington represented by the Ministry of Finance did not brand China with the status of a “currency manipulator” in the relevant report. According to Steven Mnuchin, the devaluation of the Chinese currency is also explained by objective factors, including a slowdown in the country’s economy. As a result, the Ministry of Finance left the PRC in the list of those countries that require “most attention” in the context of monitoring, but did not aggravate the situation.

However, this fact does not solve the problem of the fall of the yuan. A further devaluation of the Chinese currency may lead to an outflow of capital from the country, with all the ensuing consequences. The Australian dollar is forced to respond to current events not only because of its strong dependence on the Chinese economy, but also against the background of flight from risky assets.

Another factor that puts pressure on the Aussie is the decline in copper prices. The cost of a ton of this raw material dropped to a six-month minimum. The cheaper yuan rendered a “disservice” to the commodity market, while copper reacts also to a decline in stock markets. If yesterday’s trading on the US stock exchanges ended with growth, there was mainly negative dynamics on trading in Asia. Predictably declined Chinese indices, which lost about one percent, while the Japanese Nikkei 225 fell by 0.4%. Traders are concerned about a possible slowdown in the global economy, as warned by IMF economists and other specialists. 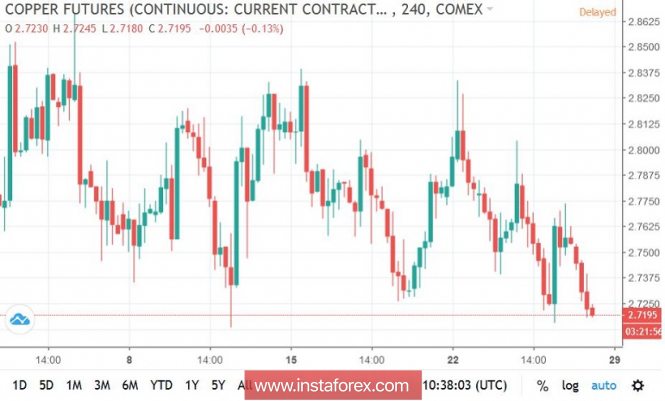 In particular, last week, the results of a survey of more than 500 economists were published. Most of whom predicted a slowdown in the growth of the global economy next year. Whereas at the beginning of this year, almost all of them had the opposite opinion. The escalation of the trade war between the United States and China, as well as the growth in the yield of government bonds, changed the common position.

Thus, the Australian dollar is under pressure from a whole complex of fundamental factors that are somehow connected with China. Therefore, any more or less large-scale growth of AUD / USD should be considered as a reason for opening long positions. Even in the period of the weakening of the American currency, “Aussie” in recent months did not rise above the 72nd figure, then showing a rather rapid decline.

Technically, the picture is fully consistent with the foundation. On the daily chart, the price is between the middle and lower lines of the Bollinger Bands indicator (which in turn is in the extended channel) and under the Kumo cloud.

In addition, the Ichimoku Kinko Hyo indicator has formed a “Parade of Lines” bearish signal, and the MACD oscillator shows a strong oversold condition. All of the above clearly indicates the priority of the southern movement with a price target of 0.7005, this is the bottom line of the Bollinger Bands indicator. In turn, the nearest resistance level (where you can place a stop) is the mark of 0.7090 (this is the Tenkan-sen line), and then the mark of 0.7105 (this is the middle line of the Bollinger Bands indicator).