AUD/USD. The pair is approaching the stronghold of bulls – 0.7000

The Australian dollar paired with the US currency weakened to 2.5-year lows, entrenched in the 70th figure. This dynamics is associated not only with the strengthening of the greenback, although the rhythm of today’s trading is set by the US dollar. “Hawkish” comments of the head of the Federal Reserve provoked an increase in the yield of 10-year treasuries, and this fact in turn influenced the dynamics of dollar pairs.

Despite the clear dominance of the US currency, in the context of the AUD/USD pair, it is worth considering that it will be difficult for traders to break through the base of the 70th figure and go lower. The last time such a maneuver was in January 2016 – but even then the bears of the AUD/USD could not keep the price within the 69th figure for more than one week. Therefore, short positions should be treated with extreme caution: the pair is too close to a strong support level. The long weekend in China (the country celebrates Independence Day throughout the week) shifted the focus of AUD/USD traders’ attention to other fundamental factors. The theme of the US-China trade conflict has faded into the background, as the parties have so far “dispersed in the corners of the ring”, also due to the national holiday in China. The Australian dollar did not get any benefit from this fact – on the contrary, now the pressure of the US currency has increased due to the tougher rhetoric of the Fed representatives.

And it’s not just about Jerome Powell, who yesterday quite transparently hinted at the acceleration of the rate hike. In particular, speakers in recent days, Charles Evans, Eric Rosengren, Lael Brainard stated the need for further tightening of monetary policy ,and Brainard even allowed the possibility of accelerating the pace of the rate hike. Jerome Powell spoke about this, however, not directly, but in very clear hints. The meaning of its position is difficult to distort: apparently, the Fed will raise the interest rate three or four times next year and only in 2020 will it think about the level of the neutral rate.

The overall strengthening of the US dollar has not spared the AUD/USD pair. The yield spread between 10-year US and Australian bonds expanded to record levels in favor of the United States: the last time such dynamics was observed as much was 37 years ago. By and large, at one point connected many factors, the combination of which had a strong pressure on the Australian dollar.

The Reserve Bank of Australia is also not an “ally” of the Australian, as the devaluation of the national currency plays only into the hands of inflationary processes. The regulator has repeatedly stated this fact, each time voicing their concerns, if the AUD/USD exchange rate was approaching the region of the 80th figure. At their last meeting, which took place this week, the members of the RBA took a wait-and-see position, confirming the general expectations of the market about the prospects of monetary policy. According to the majority of traders, the issue of raising interest rates may not be considered until the second half of next year, and RBA members are in no hurry to dissuade the market from this. 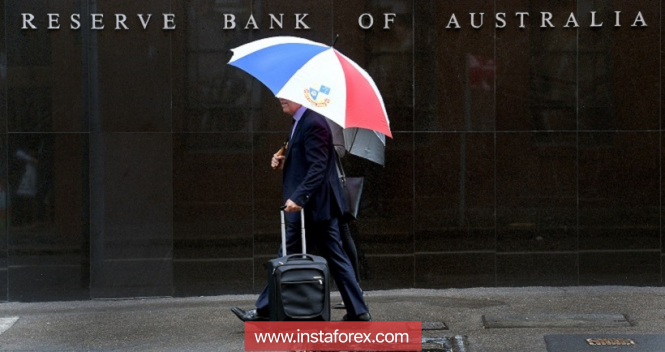 Thus, the Australian currency does not have its own strength to resist, so the “aussie” is entirely dependent on the dynamics of the US dollar. In turn, this means that the motion vector of the AUD/USD in the short term depends on the Nonfarms, the release of which is scheduled for tomorrow. If the number of employed in the non-agricultural sector exceeds the 200,000 mark, the unemployment rate will drop to 3.8%, and the dynamics of the average wage will remain within 0.3-0.4%, the US currency will continue its offensive in all dollar pairs (except for the pound-dollar pair, where the subject of Brexit dominates).

Technically, the AUD/USD pair also shows a clearly bearish picture, and on the “higher” timeframes (daily, weekly and monthly chart). On each of them the price is on the lower or between the middle and lower lines of the Bollinger Bands indicator. Ichimoku Kinko Hyo indicator shows a strong bearish “Parade of lines” signal, and oscillators also signal the priority of the downward movement.

You can define several goals of the downward scenario, depending on the timeframe: D1 – 0,7070 (the goal is almost reached); W1 – 0,7055 and MN – 0,7005. When passing the above values, the pair will target the main “price stronghold” – the mark of 0.7000. Here it should be noted that the above support levels are not a reliable stronghold – the main battle will unfold for a decrease in the 69th figure.

Tomorrow’s Nonfarms can impulsively reduce the price to the base of the 70th figure, but this price breakthrough should be treated with caution. In the area of multi-year lows, the pair can gradually buy back, and in the first trading days of the next week it can move away from record lows. Short positions in this case are appropriate only in the range of 0.7090-0.7010 or when the pair is fixed in the 69th figure. But to participate in the “battle” for a breakthrough in the 69th figure is very risky, since its outcome is not predetermined.