Beware, Brexit: the pound is growing on rumors of a possible deal

Even in the morning, the pound lazily slipped against the dollar to the base of the 28th figure, with permanent attempts to test the two-week lows. Parliamentary hearings on inflation could not support the British currency, and the strengthening dollar weighed on the GBP/USD, determining the downward trend.

The situation today on Wednesday has changed dramatically in the second half of the day. Blame – the notorious Brexit, or rather rumors around the negotiation process. Here it is worth recalling that exactly a week ago, the pound suddenly jumped almost to the middle of the 30th figure under similar circumstances. However, then the upward impulse of the pair provoked by Michel Barnier, who intrigued the market with a possible breakthrough in the negotiations. In other words, the market received first-hand information from the EU’s chief negotiator. Today, the situation is somewhat different: the voiced information is in the nature of insider information, while official confirmation is not yet available.

Despite such circumstances, the pound not only covered all the losses of the recent days, but also pulled the European currency, which was able to return to the 16th figure. The fact is that the published rumors are so optimistic that if they receive official confirmation, they will completely redraw the fundamental picture for the GBP/USD pair and other cross-pairs with the participation of the pound.

So, according to one of the US news agencies, Britain and Germany were able to reach a compromise on key issues, creating favorable conditions for the final deal on Brexit. American journalists refer to anonymous officials who are directly involved in the negotiation process. According to them, the parties mutually refused “some of their demands” (from which it is not specified), after which the probability of a “civilized divorce” has increased in many respects. Also, insider sources specified that the Germans mainly made concessions, although it is not known exactly which issues. 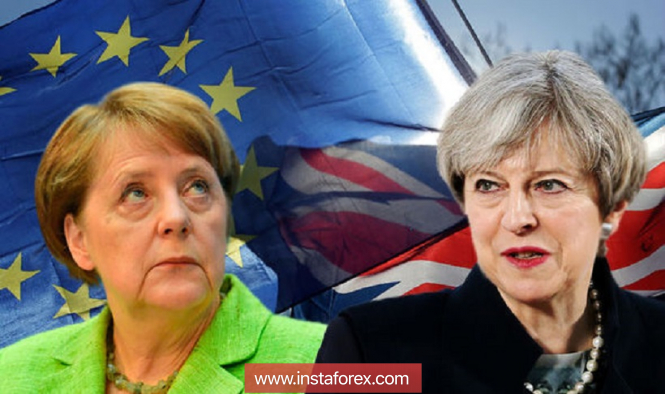 It is worth noting here that Germany has a great influence on European politics, therefore, by and large, we can talk about reaching an agreement in principle between London and Brussels – if, of course, the published information corresponds to reality.

In general, such “bells” about reaching a compromise appear more often – and this fact cannot but rejoice. The scenario of Britain’s chaotic exit from the EU looks so apocalyptic that experts differ in their assessments of the possible consequences. But they are all convinced that not only the British but also the European economy will suffer. Therefore, traders react very sharply to optimistic signals regarding divorce proceedings.

By the way, in the first half of the day the market actually ignored another signal, which was voiced by a member of the British Parliament Lidington. He said that the deal between London and Brussels is ready by 85%, and the parties have only to settle the most difficult issue that concerns the status of the Irish border. The pound remained indifferent to this rhetoric – perhaps because the 85 percent agreement was discussed last week, and maybe because even the remaining 1 percent is able to disrupt the entire deal.

And yet on the market more and more often there is information that the dialogue between Brussels and London comes to the finish line. For example, last week, the British press reported that French President Macron at the September EU summit will make a statement in which he will ask European colleagues to show “maximum flexibility” in negotiations with London, so that the divorce process ended with the conclusion of the transaction. And this is by no means a complete list of positive signals that appear recently in the information field.

Today’s situation should once again serve as a warning for those who play on the weakening of the pound. Any more or less significant hint of a deal has a strong impact on the pound. And such price spikes appear more often – today is the second case in the last week and a half. And it’s just rumors and preliminary comments that are only harbingers of the “big deal.” As soon as the parties really come to the final stretch of the agreement, the British currency will show a confident and almost recoilless growth throughout the market, regardless of other fundamental factors.

From the technical point of view, the GBP/USD pair broke through the middle line of the Bollinger Bands indicator, as well as the intersected lines Tenkan-sen and Kijun-sen on the daily chart. If on Wednesday or the next day the pair fixates above 1.2905, the indicator Ichimoku Kinko Hyo will form a “Golden Cross” signal, which warns about a possible trend change. In this case, the next price target will be 1.3035 (the top line of the Bollinger Bands indicator on D1). This level of resistance of the pair could not break a week ago, and this week also everything will depend on the further news background. If the pair still overcome this barrier, then the next price benchmark will be the price of 1.3130 (the lower boundary of the Kumo cloud). However, it is too early to talk about this: the “maximum program” for GBP/USD is more concise on Wednesday: go and gain a foothold in the area of the 30th figure.