Interruptions in supplies in Libya, Venezuela, Canada and Norway, Iran’s threats to block the Strait of Hormuz, and some weakness of the US dollar after the release of the US labor market report for June allowed the bulls for Brent and WTI to continue the rally. If oil can update the May highs, the road in the direction of $ 83-85 per barrel will be opened. According to Tehran, the aim of restraining the price of black gold tweets of Donald Trump, in fact, can bring the North Sea grade to the psychologically important mark of $ 100 per barrel. Who is bigger? Sanford C. Bernstein & Co draws attention to the reduction in oil companies’ stocks by an average of 30% since the beginning of 2000 and the increase in urban population in Asia by 1 billion over the next two decades. As a result, the demand for cars and gasoline will rise sharply, which will launch a new super cycle on black gold and allow it to grow to $ 150 per barrel.

The US president demands from his military allies (primarily from Saudi Arabia) to increase production to 2 million bpd, knowing full well that the OPEC decisions on the curtailment of the production of “bulls” for Brent and WTI at the end of June cannot be stopped. The states are exerting pressure on buyers of Iranian oil, and if their plan to reduce exports from this Middle Eastern country translates into life, then the market will take 2.5 million bpd. Tehran is the fifth oil producer in the world with a production volume of 3.8 million bpd. The country’s leadership claims that it is ready to sell as much black gold as it can.

The support of Brent and WTI is provided by the factor of production reduction in Libya from 1.28 million bpd in February to the current 527 thousand bpd. According to Capital Economics estimates, the market may lose about 2 million bpd from Iran and 1 million bpd from Venezuela, which will widen the deficit and help develop the “bullish” conjuncture of the black gold market.

At first glance, instead of putting pressure on OPEC, Donald Trump could spur the activity of American producers. For a long time, the oil market was living in tug-of-war conditions between those working on reducing the cartel’s output and companies from the States that used price increases to hike their own production and simultaneously hedge the risks. They let the number of drilling rigs from Baker Hughes grow (+5 to 863 in the week of July 6), and the Energy Information Administration forecasts an increase in production to a record 11.8 million bpd, no problems with the infrastructure have been canceled. For example, in the Perm basin in 2019 will produce 1 million bpd more than its pipes can afford to pump.

Extraction and power of pipelines 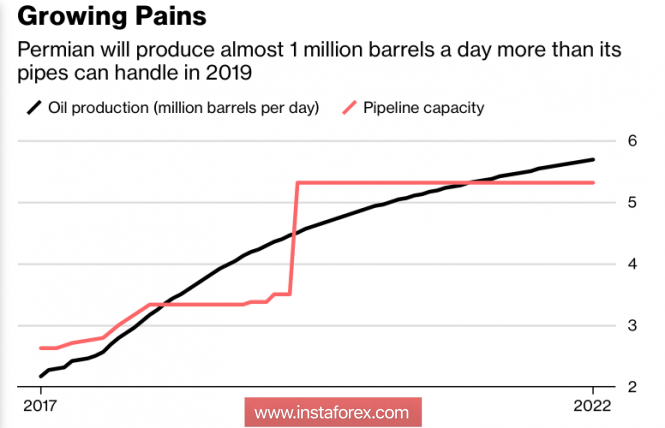 The hand to help the “bulls” for Brent and WTI is fixing profit to the US dollar after the publication of disappointing statistics on US unemployment and the average wage. The first indicator increased from 3.8% to 4%, the second did not reach the forecasts of experts from Bloomberg (+ 0.2% vs. + 0.3% m / m) 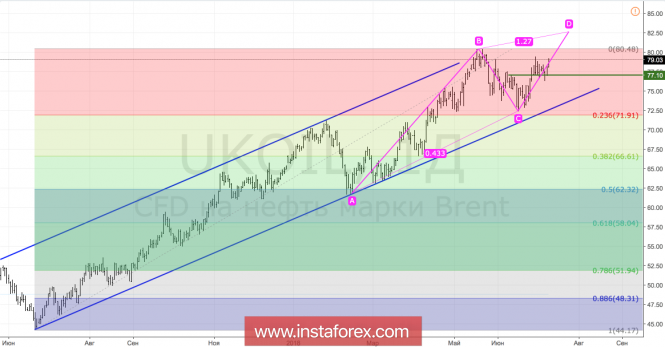