If at the beginning of 2018 someone started talking about the fact that Brent will finish the year near the mark of $100 per barrel, they would surely laugh at him. Best case scenario. Nevertheless, over the past 12 months, the North Sea variety has added about 50% of its value, and the psychologically important mark no longer seems like an impossible dream. US economic sanctions against Iran, strong global demand, supply disruptions from Venezuela and other countries and the difficulties of US shale production pushed oil futures to the 4-year highs. And from them to $100 per barrel at hand.

If Donald Trump wants to find those responsible for the rapid rally of Brent and WTI, then he should look in the mirror. According to Russian Energy Minister Alexander Novak, the US president’s tweets bring confusion to the markets. Investors do not know how to act and what will happen in the future. In addition, Washington’s actions against Tehran are too aggressive. Iranian exports before the announcement of sanctions since November were estimated at 2.5 million b/d. And if the market was initially set up with the fact that the sanctions would reduce it by 0.4-1 million b/d, then the current version of bringing the indicator to zero does not look great. At the end of the first week of October, the country exported 1.1 million b/d according to information received from tankers. The Tehran government says about 1 million b/d. In September, it was about 1.6 million b/d. Supplies are rapidly declining, but before the imposition of sanctions more time.

Only rumors about a more friendly attitude of the US to the buyers of Iranian oil allowed the “bears” on Brent and WTI to counterattack. The United States will not put pressure on India if Delhi does not completely refuse to import oil from Tehran. However, the information has not yet been confirmed, which allows investors to return to their favorite topic. When the $100 per barrel mark is reached. Players who did not have time to jump into the train leaving for the north are trying to make money on options. Since the beginning of September, the bets made with the help of futures contracts that the psychologically important level will be reached by January have doubled. BofA Merrill Lynch speaks openly about $100 per barrel and assesses the impact on the global economy. According to the bank’s forecasts, global GDP growth will lose 0.2 pp from high oil prices, while the main victims will be the eurozone, Britain and Japan. Much will depend on the US dollar. Its weakness can be a catalyst for the rally of Brent and WTI.

Dynamics of US dollar and oil 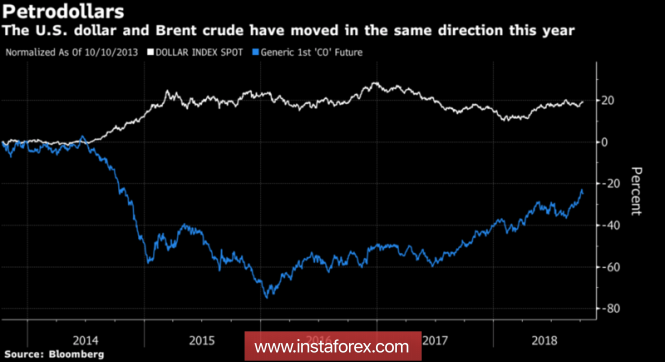 Support for black gold is provided by information about the approaching hurricane Michael to the coast of the Gulf of Mexico and the forecast of experts Bloomberg to raise US stocks for the third week in a row.

Technically, the achievement of target levels at 161.8% according to the AB=CD pattern increases the risk of a rollback. At the same time, even the breakthrough of diagonal support in the form of the lower border of the ascending short-term trading channel will not allow the “bears” to breathe calmly on Brent. Until such time as the quotes are above $76.7 per barrel, the situation is controlled by the bulls. 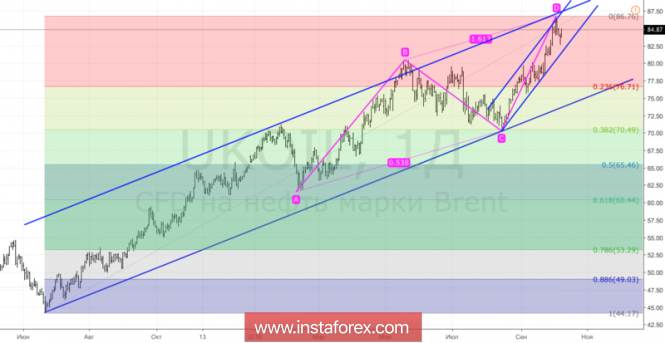