Brent goes into the lead

“Bullish” Europe, “bearish” United States – this is how you can characterize the current conjuncture of the oil market. While in the US, the end of the auto season and the departure of the refinery for maintenance are putting pressure on the WTI’s futures quotes, Brent finds support in anticipation of the entry into force of US sanctions against Iran. Donald Trump intends to cut Tehran’s exports to zero, and South Korea, Japan, and other countries are ready to hear his appeals. Iranian officials expect the figure to drop from 2.3 million b/d in June to 1.5 million b/d in September. And the efforts of Russia, Saudi Arabia and the United States, which account for about a third of almost 100 million b/d of the world supply of oil, is not enough to swing the boat in the direction of the “bears”.

The expansion of the spread between North sea and Texas grade to more than $10 per barrel was facilitated by information about the terrorist attack at the headquarters of the Libyan oil company in Tripoli and the growth of combined stocks of gasoline and distillers by 5 million barrels in the week to August 31, which indicates a reduction in demand from the refinery and is a “bearish” factor for WTI. The reduction of Libyan production, on the contrary, supports the “bulls” on Brent.

The spread of Brent and WTI 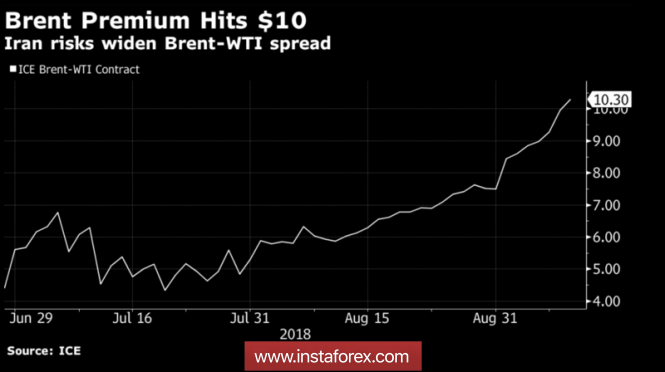 Curiously, according to a report by the US Energy Information Administration, oil reserves in the United States are falling more slowly than expected. There are rumors on the market that in connection with the trade war with China, American manufacturers are looking for new markets, which directly affects the dynamics of the reserves of oil.

In addition to demand in the US, investors are interested in the global indicator. How much will the trade conflict hit the GDP of China? Will the problems in the foreign exchange and debt markets of developing countries affect their interest in oil? I believe that the development of the situation around the expansion of import tariffs on goods from China by $200 billion, and then another $267 billion will help to answer these questions. Despite potential problems in the field of demand, large banks are moderately optimistic about the outlook for oil. According to the consensus forecast of 11 respondents of the Wall Street Journal, the average price of Brent in 2018 will be $73.65 per barrel, at WTI – $68 per barrel. This is lower than the current value of assets, but given the North Sea grade growth of more than 16% since the beginning of the year, the average price once again indicates the “bullish” oil market conditions.

The strong US dollar is a deterrent for Brent and WTI. The acceleration of the US economy to more than 4% under the influence of fiscal stimulus, a strong labor market, inflation in the target area, the Fed’s willingness to continue the cycle of monetary policy normalization and trade wars faithfully serve the “greenback”.

Technically, the inability of the “bears” in the North sea variety to gain a foothold below the lower limit of the ascending trading channel indicates their weakness. If the bulls manage to update the September peak, the risks of implementing the target by 113% on the Shark pattern will increase. 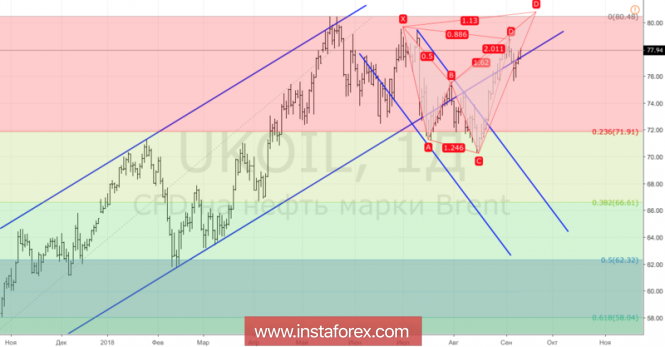