In a world where economic wars have replaced armed conflicts, only one thing remains unchanged. Any fight between countries can begin because of one person. So, it was in the story of the poisoning of the British spy and the disappearance of the American pastor in Turkey. Something similar is happening now with the disappearance of Washington Post journalist Jamal Khashoggi, in which Saudi Arabia may be involved. In response to Washington’s threats, Riyadh noted that it would take revenge for any punitive measures against it by all the forces of a country that has an influential and important role in the global economy. And although the word “oil” was not mentioned in this address, everyone understands perfectly well what the influence of the Saudis is.

The last time Riyadh decided to show its power was back in 1973, when it joined the oil embargo and provoked a global crisis in the black gold market. However, consumption in leading countries at that time was higher than it is now, and the consequences for producers were more significant than for importers of Brent. Currently, many Bloomberg experts believe that the world economy will not sustain the North Sea variety at $ 100 a barrel, and the US Energy Information Administration reduces the estimates of the growth in world oil demand under the influence of the slowdown of economies of China and developing countries in general, including wars. 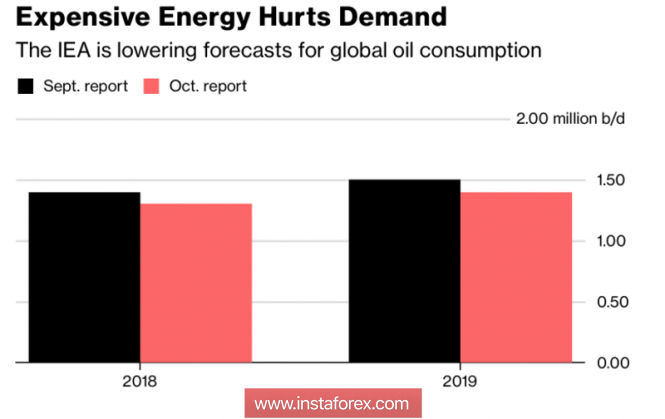 If the Saudis decide to reduce their production in the amount of $ 10.7 million b / s, they will give up the initiative to American manufacturers, although due to the undeveloped infrastructure, the activity of the latter may not lead to a decrease in prices. Yes, it makes sense to look for the causes of the current correction of Brent and WTI in the States, where stocks have been growing over the past few weeks, but the Iranian factor has not disappeared anywhere. And let Tehran calls Donald Trump tweets calling for the reduction of exports from this country to the zero level of mockery at other states, in fact, supplies continue to fall. In April, it was about 2.5 million b / d, in September, about 1.6 million b / d, in October, about 1.33 million b / d. If the Saudis really take revenge on the United States for sanctions against them, then I would not be surprised at Brent at $ 100 a barrel.

Important for the future dynamics of futures for black gold will be the position of the US dollar. If the Fed goes about Donald Trump and, looking at the unhurried pace of inflation, decides not to raise the federal funds rate in December, the US currency will fall into a wave of sales. This, in turn, will inspire the bulls of Brent and WTI to new attacks.

Technically, on the daily chart of the North Sea variety, the implementation of the patterns “Splash and Upside with Acceleration” and “Bat” continues. Reaching the target by 88.6% for the last of them near the support at $ 76.7 per barrel will increase the risks of a rebound with the subsequent restoration of the uptrend. Thus, while Brent quotes stay above the level of 23.6% of the long-term upward wave, the bulls continue to control the situation. 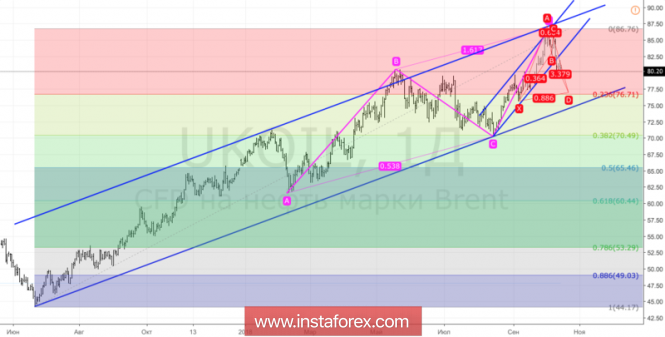