While investors are pondering whether OPEC and Russia will be able to compensate for the decline in Iranian exports, the approach of hurricane Gordon to the coast of the Gulf of Mexico allowed the “bulls” of Brent at arm’s length to approach the psychologically important mark of $80 per barrel. The share of this territory accounts for about 17% of production and 45% of processing of all American oil, where it does not get agitated and start curtailing production? However, the impact of hurricanes on pricing in the oil market is often temporary. If a natural disaster is not as devastating as originally anticipated, buyers can begin to lock in profits.

According to information gathered with the help of tankers, oil exports from Iran declined by 14% in August. Competent Wall Street Journal sources inside the country report a decrease from 2.3 million b/d in June to 1.5 million b/d in September. Deliveries of oil from the largest OPEC producer are falling by leaps and bounds, and in fact even before the entry into force of US sanctions in early November is still far. Exports to Europe fell by 45% in July, to South Korea-by 40%, India is considering a 50% reduction in purchases, although along with China and Turkey will continue to receive oil from Tehran. The hole should close the cartel, and Bloomberg experts expect production growth to 420 thousand b/d in August, to 32.74 million b/d. If the actual figure is smaller, “bulls” in Brent and WTI will continue their attacks.

Dynamics of oil production by OPEC 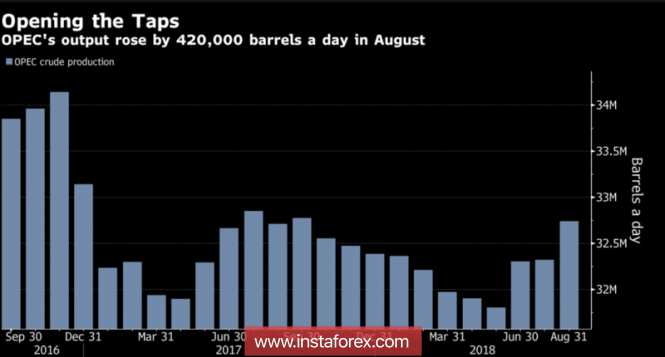 Despite the fact that Nigeria has tried to rein in speculators, saying that its efforts and the efforts of Saudi Arabia, the UAE and Angola are sufficient enough to compensate for the reduction of Iranian exports, the big banks are reviewing their forecasts upwards. Thus, Barclays believes that the North sea variety under the influence of US sanctions and the decline in production in several producing countries may exceed $80 per barrel in the short term. The average price forecast for 2020 was raised from $55 to $75 per barrel. BNP Paribas doubts that the decline in supplies from Iran, the occasional interruptions in Libya and the decline in production in Venezuela will be offset by an increase in OPEC production. The bank expects to see Brent averaging at $79 per barrel in 2019.

Favorable market conditions can easily be taken advantage of by American manufacturers. According to the US Energy Information Administration, the volume of production in the United States increased from May to June by 230 b/d and at any time could touch on the psychologically important level of 11 million b/d. Alas, the market still ignores this as a “bearish” driver for Brent and WTI, preferring to win back the factors of the hurricane and American sanctions against Iran.

Technically, on the daily chart, Brent achieved a target of 88.6% on the “Shark” pattern, which increases the probability of rollback in the direction of 23.6%, 38.2% and 50% of the CD wave. If the bulls manage to update the September peak and gain a foothold above it, the risks of continuing the upward campaign to the target will increase by 113%. 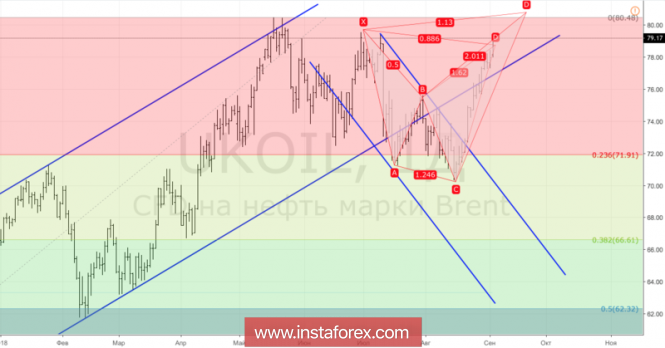