Brent is betting on politics

The oil market has become so politicized that reports on the state of American stocks of black gold makes less impression than the tweets of Donald Trump. Not so long ago, the US president said that OPEC artificially raises prices. After the cartel and other producing countries decided to increase production by 1 million b/d, the owner of the White House changed his anger to mercy and asked Saudi Arabia to raise rates by half. The problems of Venezuela and Iran will still lead the market to surplus and will make the price of black gold rise. And this, in turn, will raise the price of gasoline and hit the pockets of American taxpayers.

The states are trying to eliminate the contradiction in their own policies with the help of the Allies. Despite the growth in shale production and the cumulative output of almost 11 million b/d, the US continues to act as a net importer of oil. Their dependence on foreign supplies was a third less than 12 years ago but 8 million b/d is still a pretty decent figure. Of these, 3 million b/d comes from OPEC, where prices are initially higher. Meanwhile, the problems with the power outage in Canada before the end of July reduced production by 360 thousand b/d, which led to a narrowing of the spread. Brent still costs more than WTI.

Dynamics of the main grades of oil The contradiction lies in the fact that, thirsting for low prices for black gold, Washington actually raises them with economic sanctions against Tehran. Donald Trump set an ambitious goal to reduce exports to zero, forbidding other countries in the world to acquire Iranian oil. At the same time, leaving the market of one of the largest OPEC producers is clearly a bullish factor for Brent and WTI. The States have no choice but to ask the rest to fill in the gap.

However, Tehran has something to answer. He threatens to block the Strait of Hormuz, a major oil shipping route, and if this happens, I personally will not be surprised at the takeoff of the North Sea grade to $ 90 per barrel. Black gold is sensitive to geopolitics. Take, for example, the struggle for power in Libya or the political and economic crisis in Venezuela, which deprived the producing countries of 750-850 thousand b/d each. And here is an important oil artery! Hedge funds and other speculators certainly keep this scenario in mind and are not going to go far from long positions on Brent and WTI.

As long as the ball is ruled by politics, other factors remain in the background. Problems with Canadian oil sands allow the experts of Reuters to predict the growth of US reserves by 3.3 million barrels by the end of the week of June 29. Rally figures can continue for the four – five days in a row, which plays into the hands of fans of black gold.

Technically, the formation of the inner bar speaks of uncertainty. The breakthrough of its lower limit near $ 77.1 per barrel will increase the risks of forming a reversal pattern 1-2-3. On the contrary, a successful assault on the resistance at $ 78.9 with subsequent update of the June and May highs will open the Brent road to the north in the direction of the target by 127.2% on the AB = CD pattern. 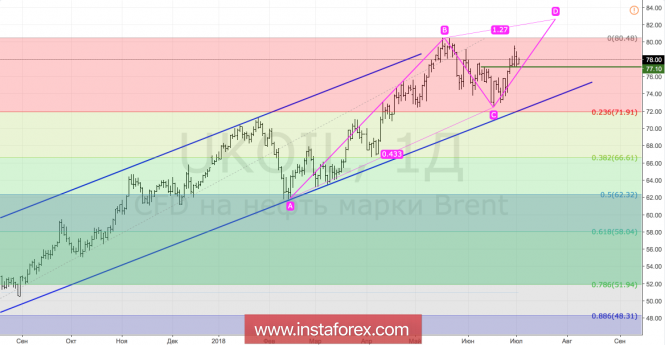