Due to Saudi Arabia’s export problems in the Red Sea and information about the previous later than anticipated recovery times in the North Sea, oil was able to lick some of the wounds received in July. Brent and WTI close the month in the red zone amid a strong dollar, growing risks of slowing global demand and increasing production of OPEC. News from Saudi Arabia and the North Sea is seen as short-term “bullish” factors, although not everyone agrees.

According to Goldman Sachs, the cartel will be able to increase production by 1 million b / s, but the efforts of Riyadh and Moscow will not be enough to compensate for the loss of Iranian production of black gold as a result of imposing new sanctions on Tehran from Washington. As for the American production, it will grow, but at a slower pace than currently expected due to problems in the Perm basin. The market was disappointed because of the inability of the “bears” to develop a correction that will lead to the “bullish” trend recovery. Goldman Sachs believes that Brent will test the mark of $ 80 per barrel before the end of this year.

The bank looks like a black sheep. A poll of experts from Reuters showed that OPEC increased production to 32.64 million b / s (+70 thousand b / s), and the number of drilling rigs from Baker Hughes increased to 861. At the same time, the decline in China’s business activity indicates an economic slowdown of the country- the largest the consumer of black gold. The boost in production and the reduction in demand increase the risks of surplus, which is a “bearish” factor for Brent and WTI. Infinitely, the problems of supply disruptions in the Red and North Seas cannot continue, and sellers of both varieties will resume their attacks as soon as the situation there begins to change for the better.

Speculators do not particularly believe in oil, while fixing profits on long positions does not yet cause the development of a serious corrective movement for Brent and WTI.

The dynamics of oil prices and speculative positions. 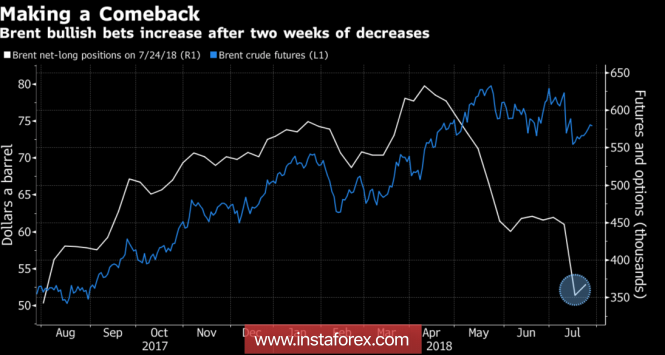 Donald Trump is capable of rocking the boat, who unexpectedly announced his readiness to meet with the head of Iran Rouhani. Prior to this, the US president was twitching with Tehran on his Twitter account. Given the desire of the owner of the White House to reduce gasoline prices, which requires the correction of Brent and WTI. It can be assumed that he will depart from his intentions to reduce Iran’s exports to zero in exchange for Rouhani’s refusal to develop nuclear program. If this “bullish” driver is eliminated, then the chances of continuing the southern campaign of both varieties of black gold will increase.

Technically, the inability of the “bears” to keep Brent quotes below the lower limit of the upward trading channel confirms their weakness. To develop a correction, the target is in the direction of 88.6% on the “Bat pattern”, while sellers need to break the support at $ 71.9 per barrel and update the July low. 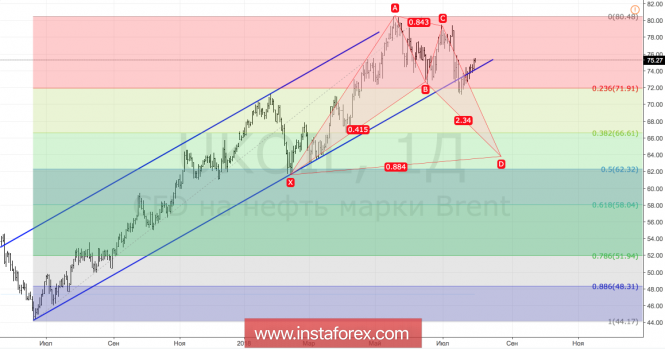