Brent pulls the rope on itself

The oil market is no stranger to living in a constant state of tug of war. If last year it was about reducing OPEC production, on the one hand, and increasing the production of oil in the United States – on the other, now only the actors have changed. Since the announcement of US sanctions against Tehran, Iranian exports of oil and petroleum products have declined by about 35%, including due to the gradual withdrawal of such large buyers like China and India. At the same time, trade wars threaten to slow down the world economy and global demand for oil, which, against the backdrop of increasing OPEC production and US companies, speaks of the undisclosed potential of the “bears” for Brent and WTI.

It should be noted that Washington has chosen an effective weapon in the fight against the objectionable regime. Gone are the days when it was necessary to send troops and missiles. Now the enemy can be brought to his knees with the help of economic methods. About 80% of Iran’s tax revenues are related to the export of oil and petroleum products. The indicator by the time of the official entry into force of sanctions in November could be reduced from 2.5 million b/d to 1.4-1.5 million b/d. It has already declined to 1.9 million b/d. as a result, there are holes in the budget that are closed with the help of the printing press. Inflation accelerates, and the local currency falls by 60%.

Dynamics of Iranian exports of oil and oil products 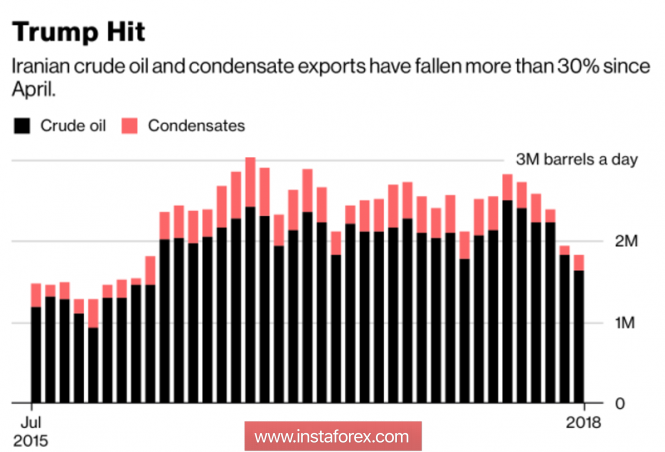 At the same time, sanctions against Tehran are a double-edged sword. The reduction in the supply of black gold to the world market is a key “bullish” factor that pushes prices up. Currently, the average price of Brent is $72 per barrel, and the International Energy Agency warns that in the near future the North Sea variety may gain a foothold above $80. For Trump, such a situation in the oil market is not profitable, since in this situation the cost of gasoline increases and the costs of American consumers grow. And on the nose of the midterm elections of the Congress, which may result in the victory of the Democrats and impeachment. Hence the calls for OPEC and Russia to increase production.

Interestingly, Moscow, under US sanctions, listens to them, while Saudi Arabia, on the contrary, puts sticks in the wheel. Information that Riyadh feels comfortable at the current levels of Brent, threw the quotes higher. Russia, according to the Minister of Energy Alexander Novak, claims that the North Sea variety at $70-80 per barrel is the result of sanctions, in the long term prices should fall to $50. In favor of this point of view is the fact that the consequences of trade wars will not take place immediately, but after a while, works. The expansion of the White House import tariffs against China by $200 billion will make itself felt after 6-9 months.

Technically, another unsuccessful test of diagonal support in the form of the lower border of the ascending trading channel indicates the weakness of the “bears” for Brent. Their opponents seriously intend to execute a target for 113% on the “Shark” pattern. 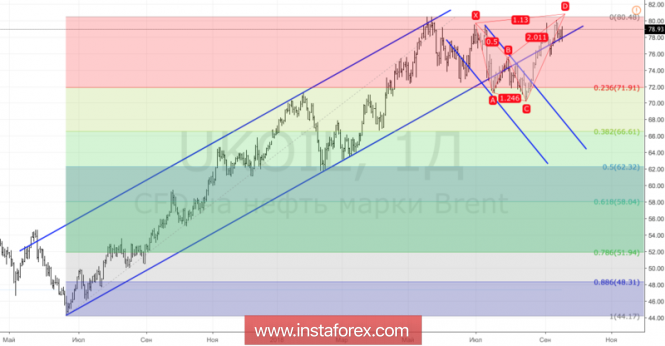