Brent received a dope from the dollar

Quotations of futures for the North Sea oil grade have risen to the maximum since early July amid a weakening of the US dollar, a breakthrough in the NAFTA negotiations, an increase in global appetite for risk and a reduction in OPEC production. For a long time, investors could not answer the questions, could the cartel cover the emerging deficit in connection with economic sanctions against Iran and how deep will the influence of trade wars on global demand for black gold? The reality was not as frightening as it could be supposed, and the “bulls” for Brent and WTI took up the job with renewed vigor.

Donald Trump calls for reducing Iranian exports to zero in connection with discontent over the implementation of the anti-nuclear program of Tehran. As a result, the latter was forced to reduce production from 3.09 million b / s in April to 2.06 million b / s in August. The buyers were blown away by the wind, despite the fact that local oil prices were the most serious since 2004. The problem is that sanctions against Iran are a bullish factor for black gold, and to reduce its impact on prices, the US administration is ready to sell strategic reserves and appeals to OPEC assistance. The cartel is reviewing its program to reduce production by 1.8 million b / s and is allegedly ready to cut the size of the cut, but in fact, it does not. Moreover, the Monitoring Committee made adjustments to the previous statistics. OPEC in May exceeded its obligations by 147%, in June, by 120%. He must actively increase production in order to reduce the deficit. This does not happen, which leads to higher prices.

The correction of Brent and WTI from mid-June to mid-August contributed to the US dollar, which strengthened against the background of trade wars and the tightening of the monetary policy of the Fed.

Dynamics of Brent and USD index

At the end of summer, the situation changed. Donald Trump’s dissatisfaction with the monetary policy pursued by the Federal Reserve gave grounds for rumors about a slowdown in the normalization process, which forced speculators to fix profit on the dollar. At the same time, a breakthrough in the negotiations between the United States and Mexico gives hope that the owner of the White House can be reached. Including China, the largest consumer of oil, whose economy is slowing down. So, the demand for black gold is also potentially slowing down. In fact, the return of independent processors from summer holidays led to an increase in oil imports in the Middle Kingdom by 1.4 million b / s compared to July to 6 million b / s. If there are no problems on the demand side, and the supply dynamics allows us to talk about the “bullish” market conditions, then why Brent should not aim at renewing the May high?

Technically, after an unsuccessful test of important support at $ 71.35-71.9 per barrel, the bears signed their own weakness. The initiative moved to the “bulls”, which activated the pattern of the “Shark” and moved quotations in the direction of its target by 88.6% and 113%. They correspond to $ 78.5 and $ 80.8. 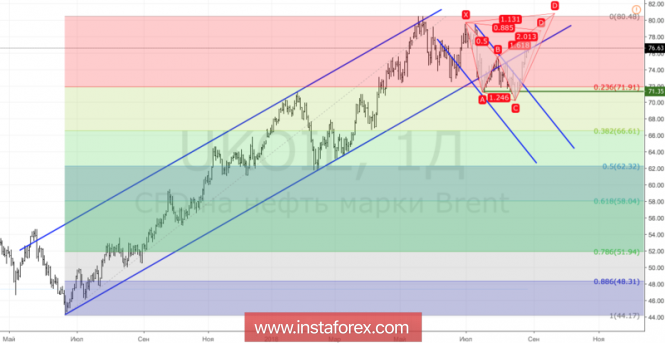