The report on retail sales did not give the dollar, a reason to complete the correction and return to the growth trajectory. In September, the growth was only + 0.1%, which is noticeably lower than the predicted + 0.5%, excluding cars, a decrease of 0.1% was noted. The stock reserves have slightly decreased from + 0.7% to + 0.5%, and this is the only parameter that can be written in plus. The ratio of warehouse stocks and retail volume characterizes the level of health of the economy. It is assumed that the lower the inventory, the more dynamically they are updated, which means that production is on the rise. On the other hand, the higher the volume of retail sales, the higher the consumer demand, the higher the purchasing power of the population.

Until 2011, this figure declined primarily due to a strong drop in stocks, since industrial production in the United States after the 2008 crisis was in recession. The subsequent five-year period was characterized by growth, that is, the US economy demanded serious support both because of a drop in production and because of a decline in demand. Since August 2016, the ratio has once again rushed down, and at this stage indicates a steady growth of the American economy.

Most likely, the position of the Fed will not change due to falling markets, since any fall has a short-term effect, and economic growth is long-term. The Fed assumes that the macroeconomic background for 2019 is positive, so there will be no change in the intention to reach a level of 3.0% at the rate. Markets assume that the rate will be raised once again in the current year and three times in 2019, and only after that some changes are possible.

At the same time, the very fact of a rate increase leads to serious consequences in financial markets. In the coming months, the yield on 10-year US bonds will reach 3.5%, at the same time, there will be a steady increase in the supply of bonds due to the need to refinance debts. It is also necessary to proceed from the fact that the demand from foreign investors will grow, both because of the growing costs of hedging, and because of the rising costs of servicing debts and their refinancing.

Today, the Treasury will publish a report on the movement of foreign capital to August inclusive, it is expected that after a rather long period of decline, the demand for American securities will show growth, which will allow the dollar to complete a corrective decline. At the same time, if the report turns out to be worse than expected, it may exacerbate expectations for the dollar, since the budget deficit is already growing at a record pace. In a joint report by US Treasury Secretary Steven Mnuchin and White House Administrative Department head Mick Mulvaney, published on the government’s website on Monday, the budget deficit in fiscal 2018 increased to 3.9% of GDP, a record since 2012, deficit is already 779 billion dollars, and in 2019, it is projected already 981 billion, or 4.6% of GDP.

It is becoming increasingly clear that the high recovery rates of the US economy are the result of outstripping debt growth, and not at all structural or tax reforms. The bullish dollar trend platform is rather fragile.

The euro is losing support due to a noticeably deteriorated ZEW indicator. The forecast for business activity in Germany fell to -24.7p, which is the worst indicator since 2012, for the eurozone as a whole, the decline was -19.4p against -7.2p a month earlier. 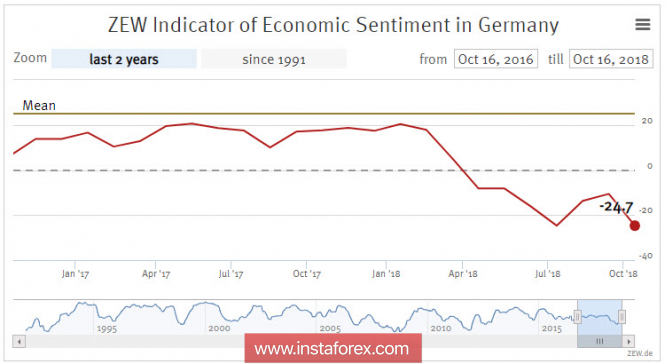 Stop the decline in the euro can report on inflation, which is expected on Wednesday, while optimistic forecasts. EUR / USD is in the consolidation zone of 1.1533 – 1.1608 and, most likely, no sharp movements will be undertaken until Wednesday.

The pound received strong support after the publication of the employment report. The average salary rose in August to 3.1% versus 2.9% a month earlier, which was unexpected, since forecasts predicted a decline to 2.8%. 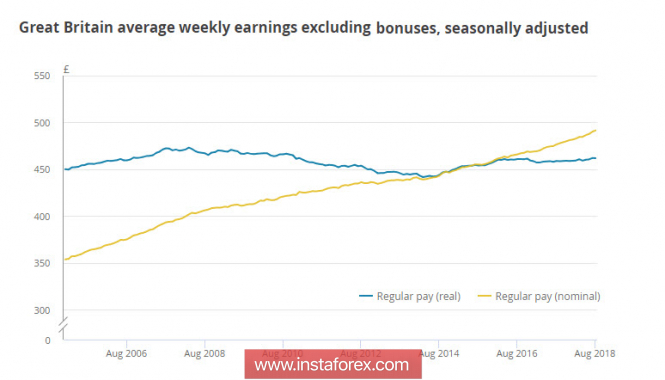 The unemployment rate remained unchanged, at around 4.0%. However, it is the data on wages that look the most important now, since the chances of seeing an increase in inflation have increased. Tomorrow, a report on consumer prices for September, while the forecast is negative, will be published, but GBP / USD, under the merger of the labor report, will attempt to grow in the next 24 hours.