Dollar went on a rollercoaster (Demo)

The main pair swept on a roller coaster, first jumping to the top of Figure 12, then failed following its founding. Such a spectacular metamorphosis took place against the backdrop of dramatically changed expectations about the cycle of normalization of monetary policy by the FED. The release of the weak macroeconomic statistics lowered the chances of three increases in the federal funds rate below 30% 2017, forcing investors to sell dollar en masse, but the Federal Reserve's unwillingness to perceive it as a trend change returned to "American" respect for players.

All the first half of the week to June 16 EUR/USD consolidated range 1.117 -1.124, preferring to await the outcome of the FOMC meeting. However, the reason for the purchases are not they. The sudden deceleration of consumer prices from 2.2% to 1.9%, core inflation-from 1.9% to 1.7% y/y, as well as a slowdown in retail sales in may, 0.3% m/m (worst result over the past 16 months) placed quotes to Euro $1.1295. Firstly, investors have intensified fears that slowing inflation will force the FED to downgrade forecasts for it and move away from its plan to raise rates to 1.5% by the end of the year. Secondly, the idea of restoring the GDP in the second quarter after a dismal first was questioned in relation to the retail trade.

The Federal Reserve really lowers its estimate of inflation for 2017 with 1.9% to 1.7%, but has kept them at the same level of 2% for 2018-2019. This means that the slowing CPI is seen as a temporary phenomenon, target will be achieved, and the Central Bank will be able to keep it at the required level for an extended period of time. Confidence the FED passed on to investors, so much so that Janet Yellen said that the slowdown in the growth of consumer prices linked to their fall for services of mobile operators and on medication. This is a temporary phenomenon, so that in the near future expect upward recovery dynamics of inflation.

This fact, coupled with a strong labor market, where unemployment has dropped to 16-year low, allowed the FOMC to keep betting on projections for 2017. The majority of the members of the open market Committee are expecting another increase in it until the end of the year. 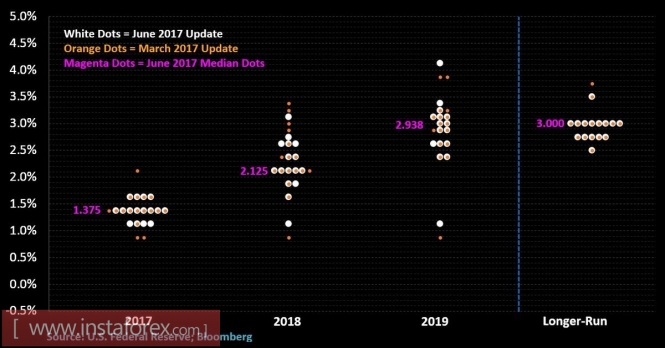 The reaction of the EUR/USD at a moderately-Hawk Janet Yellen rhetoric does not make them wait long, and already during the European session of 15 June the pair collapsed to the lowest mark since late March. The risks of lack of compromise between the Evrogruppoj and the IMF on the issue of providing the next tranche of aid to Greece are able to drop the euro even lower. Athens may miss the July payment of obligations, and will again market rumors about a breakup of the eurozone.

Technically after the implementation target to 88.6% for the inverted pattern of "Die Fledermaus" followed the natural consolidation and correction. Breakthrough in the diagonal support in the form of the bottom border of the rising trade channel will increase the risks of continuing the southern traverse in the direction of 1.09. 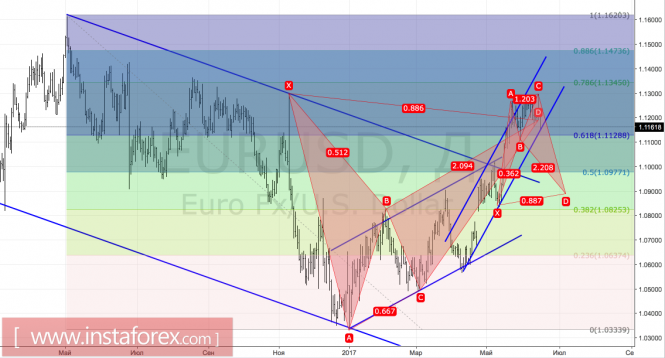