Dollar under pressure on the wave of lower geopolitical risks

On Monday, investors closely followed the meeting of D. Trump and V. Putin in Finland. Its outcome is really not known, as the leaders of the two countries at the press conference did not report anything vital, but limited themselves to general phrases. But the way they looked and how they answered the questions indicated that some important agreements had been reached. This instilled optimism in investors and had a calming effect on them. On this wave, the demand for risky assets, which, however, turned out to be limited, was revived.

The foreign exchange market reacted to this event by the weakening of the US dollar, which at the same time did not have a noticeably strong character. The dollar index, reflecting its dynamics to the basket of major currencies, declined from 94.50 points at the opening to 94.27 points at the close, while still remaining at local annual maxima.

The main currency pairs also added to the “American”, but not so noticeable that it was possible to talk about the actual trend change in the currency markets. Today, at the beginning of trading in Europe, the dollar also remains under slight pressure amid a renewed rise in the yield of government bonds of the US Treasury. So, the profitability of the benchmark of 10-year Treasuries is growing by 0.27% to 2.864%. The dollar is adversely affected by the reluctance of market players to take noticeable actions before the speech of J. Powell, the head of the US Central Bank, today, as well as tomorrow. Probably, investors are careful with their actions, as the head of the Federal Reserve can speak not only of supporting the US dollar but also of pressure if it concerns the topic of continuing the cycle of raising interest rates and slowing inflation, as evidenced by the latest data on economic statistics.

It is likely that before the speech of Powell, the dollar may remain under pressure. The main downward factor for him today is the decline in geopolitical tension after the tet-a-state talks on Monday with Trump and Putin.

In our opinion, in spite of this optimism, it is hard to expect a global depreciation of the US currency, since the factor of trade wars has not disappeared anywhere and will often remind us of itself.

The currency pair EUR / USD is trading above the 1.1715 level. It seems that the expectation of Powell’s speech and the reduction of geopolitical tension will push the pair up to 1.1785.

The GBP / USD currency pair is tightening up after the eurodollar. Perhaps, today’s speech of the head of the Bank of England Carney will support this dynamic. A break of 1.3265 may lead to a local price increase to 1.3300. 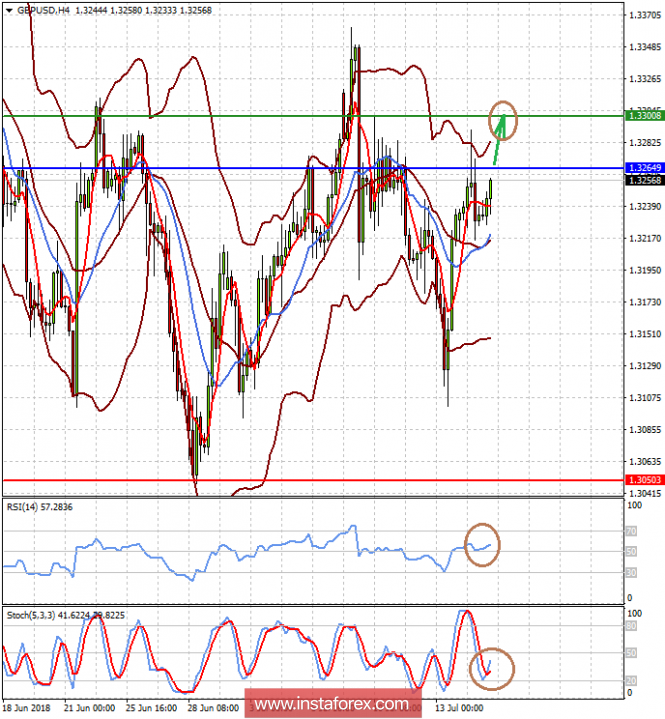