Today, all attention in the first half of the day was riveted to data on the servant sector in the UK, as well as retail sales in the eurozone. As a result, none of the reports pleased investors, which led to a decline in the euro and the pound against the US dollar after yesterday’s small upward correction.

Speech by the British Prime Minister Theresa May on Brexit did not lead to clarity in the future direction of the British pound, but more on that below.

The report on the activity of the services sector in Germany, which in September grew a little slower than previously thought, did not add optimism to euro buyers at the beginning of the European session.

According to IHS Markit, the PMI Purchasing Managers Index for servants fell to 55.9 points against a preliminary estimate of 56.5 points. Composite PMI index of Germany also fell to the level of 55 points from 55.3 points in August.

As I noted above, retail sales in the eurozone declined in August. Fall is observed for the second month in a row. This indicates the fact that the region’s economy has not yet recovered after a serious slowdown in the first and second quarters of this year. 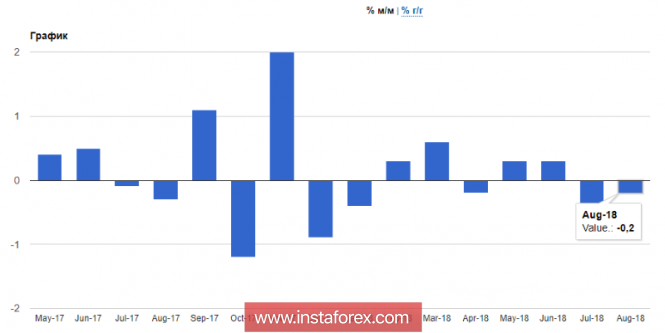 According to the statistics agency of the EU, retail sales in August of this year fell by 0.2% compared with July. Compared to the same period in 2017, sales increased by 1.8%. Economists had forecast retail sales growth in September. In July, retail sales in the eurozone fell by 0.6%, rather than 0.2%, as previously reported.

The statements made today by the representative of the Federal Reserve, Charles Evans, were generally ignored by the market, since they almost coincided with the statements made by the Fed chairman the night before.

Evans wants the Fed to continue a gradual rate hike, as the fundamental factors behind the growth of the US economy are strong in the short term. He also noted the outlook for inflation, in his opinion, they are quite positive and there is no need for a restraining monetary policy.

As for the technical picture of the EUR / USD currency pair, buyers failed to cope with the challenge of breaking through the resistance level of 1.1590, which I paid attention to in my morning review, and weak data led to the return of large sellers of risky assets to the market. The breakthrough of the intermediate support of 1.1535 will only increase the pressure on the euro, which will return the trading instrument to the weekly lows.

The UK and Brexit

A speech by the British Prime Minister Theresa May took place today, in which she urged Brexit to stick to its plan, but did not rule out the possibility of secession from the EU without an agreement. Such statements put even more pressure on the British pound, which by this time had significantly “suffered” after data on activity in the UK services sector.

May also called on the members of her party for unity.

According to a report by Markit, PMI for the services sector in Great Britain dropped to 53.9 in September of this year, compared with 54.3 in August. Despite the slowdown in activity, finding the index above 50 points still indicates its growth.