EUR / USD. 23rd of July. Trump issued another “bomb” and denounced the displeasure from the actions of the Fed 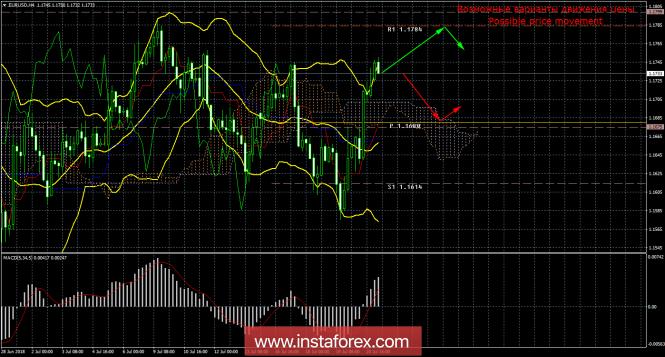 The currency pair EUR / USD on Friday, July 20, worked out the target level of 1.1698 with a large margin, and at the same time overcame the cloud of Ichimoku. On Friday, no single macroeconomic report was published. However, the odious president of the United States, Donald Trump, has come to the rescue of traders, as is often the case in recent months. Recall that recently the head of the United States was on a business trip to Britain and there he managed to criticize the plan of Brexit Theresa May, at the same time recommending her to sue the EU. And on Friday, Trump said in an interview that he was seriously considering the possibility of imposing duties on absolutely all Chinese goods imported to the States if China did not change its trade policy. Thus, Trump does not intend to stop at what he has achieved and will push his interests in trade with China further. Now step for China. It is unlikely that they will back down, most likely, they will declare their readiness to impose their trade sanctions against American products. However, exports from both countries are not rubber. If the States impose sanctions on all goods from China, and Beijing will respond with adequate countermeasures, then more heavy weapons can be used in the form of higher trade duties, prohibitions on imports of certain goods and groups of goods, and other restrictions. In general, so far the whole situation looks like the very beginning of the trade war. Ahead, it seems, we are waiting for a lot of interesting things. The second significant event of the last trading day of the past week was Trump’s statement about the Fed’s actions. The US President noted that by raising the key rate, the rate of the US currency is growing, which is unprofitable for the country. Thus, after about a year of “silence” Trump returned to his favorite topic of the disadvantage of the “expensive” dollar. However, if the US president continues to impose sanctions against all who can, then sooner or later the attractiveness of the dollar in the foreign exchange market will decline.

For the pair EUR / USD, the upward movement continues. As there are no signals about the beginning of the correction at the moment, it is recommended to keep open long positions with a new target of 1,1784. On Monday, trading can be calm, volatility will decrease, and correction on the instrument may begin.

Orders for the sale of intraday and small lots are recommended to open if the MACD indicator turns down, which means readiness for correction with the target level of 1.1675, which is derived from the average volatility of the instrument in recent days and the status of Monday as a “half day off” day.