The pound rose again strongly against the US dollar and managed to reverse its downward trend formed after the next increase in interest rates in the United States.

Rumors and talks that the EU and the UK have made progress in the Brexit negotiations have once again supported us. Whether this is in fact the case remains unclear, but, judging from yesterday’s statements, the terms of the agreement may be approved in the near future. Of course, the pound is no longer responding to this news as it was before, but it is still clear that investors remain optimistic in reaching a deal by the deadline.

The EU and the United Kingdom intend to outline the future of trade relations by November of this year, although there are still a number of contradictions regarding the Irish border. As noted in yesterday’s statements, the EU and the UK are close to resolving all other contradictions regarding exit conditions, and if an exit agreement is reached, it is expected that the EU will voice its views on future relations next week.

Again, all these statements were made without any specifics, which provided only temporary support to the British pound, which was going to another fall against the US dollar, practically losing all the advantage gained last week.

As for the technical picture of the GBP / USD currency pair, we should pay attention to today’s data on the growth of the UK economy, since it will depend on them whether the pound will continue to grow in the short term or the current upward potential will be limited by resistance around 1.3175. Only a breakthrough in this area will open the way to new weekly highs and lead to a resistance test of 1.3270 and 1.3350.

Donald Trump and the Fed 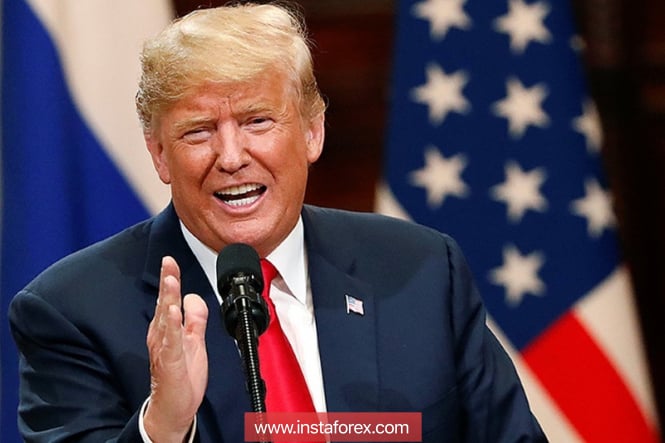 The US dollar fell against the euro in the afternoon after the Fed representatives made statements related to the credit policy made by the US president.

Yesterday, Donald Trump expressed his views on the actions of the Fed in relation to interest rates, saying that he does not like what is happening and should not be in such a hurry to raise interest rates.

It is clear that in the current situation, Trump does not want even a slight slowdown in the economy, which is likely to happen if the committee continues to adhere to the plan to normalize monetary policy.

Trump also said that he did not speak with Fed Chairman Powell on this topic, because he wants to remain uncomplicated in this situation, but believes that the normalization of monetary policy is quite a reasonable step.

A speech at the end of the day by President of the Federal Reserve Bank of Dallas, Robert Kaplan, also put pressure on the dollar, even though Kaplan spoke more about the prospects for further rate increases, unlike his colleagues.

As stated by the Fed, inflation will remain under control, and the prospects give the Fed flexibility in terms of the rate of increase in interest rates. He is also confident that he should continue to raise the federal funds rate, and at least three more rate increases seem completely unreasonable.

Robert Kaplan is also not yet ready to judge whether the Fed will have to pause the rate hike next year or the increase will continue at current rates. Everything will depend on the incoming statistics at the end of this year. Let me remind you that in December of this year, another increase in interest rates is planned by the US Federal Reserve.