EUR/USD: fear has big eyes – the dollar is getting cheaper again

Global trade and political conflicts are again the focus of the currency market. By a surprising coincidence, the situation has worsened on almost all “fronts”: the US-China talks broke down, the situation on Brexit reached a deadlock, and the deal between Washington and Ottawa on NAFTA has not yet been renegotiated. As a disappointing background, these problems are hyperinflation in Argentina and Turkey, as well as the economic crisis in South Africa.

In other words, the market returned to the starting point, being in the state in which it was at the end of summer. The dollar then strengthened throughout the market, and paired with the euro even tested the 12th figure. At the moment, the fundamental background for the pair again becomes negative, but with one significant difference: the Federal Reserve the day after tomorrow can give the dollar bulls an unpleasant surprise in the form of its indecisiveness regarding further actions.

The trade war with China, which previously supported the US currency (as the market used it as a defensive asset), may subsequently “sink” it. The Fed has been focusing on the risks of foreign trade uncertainty for several months, but has not yet linked this factor with the pace of monetary policy tightening. If the regulator hints at such a relationship, it will be problematic for the dollar to show growth in the escalation of the US-China trade conflict. By the way, the last exchange of economic blows was ignored by the greenback, which suggests that the market is dominated by thinking about the negative impact of the trade war on the US economy.

At the beginning of the trading week, dollar bulls tried to develop success: at the beginning of the European session, the dollar index again tested 94 figures, and the yield of 10-year Treasuries is above 3 percent. The dollar reacted to the events of the weekend, when the Chinese refused to hold further negotiations. According to the American press, Beijing literally at the last minute cancelled the visits of two delegations to the United States, and also cancelled the visit of Vice-Premier Liu He to Washington. Moreover, the US decided to impose sanctions against the Chinese Ministry of Defense because of China’s decision to purchase military aircraft and missile systems from Russia. Beijing considered such actions as interference in the internal affairs of the country, after which the Chinese Ministry of Foreign Affairs summoned the US Ambassador in Beijing to express their protest. 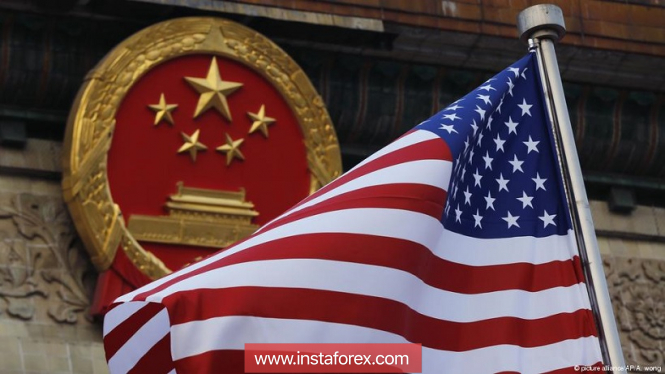 In other words, relations between the two superpowers have deteriorated sharply, although a few weeks ago the Chinese delegation left Washington with a sense of “encouraging optimism”. This optimism was then reflected in the quotes of major currencies, putting pressure on the dollar. Now the situation has returned to “square one”. In addition, during the weekend, the British Prime Minister voiced a rather pessimistic speech that the Brexit talks reached a deadlock, as Brussels “does not hear” London and rejects the proposals without explaining any reasons. Theresa May has also come back to her recent thesis, which boils down to “the lack of a deal is better than a bad deal.” The pound (as well as the euro) lost ground under its feet against this background, and the dollar received an additional reason for its growth.

But there is one “but”: the approaching meeting of the Federal Reserve. The US currency can not carelessly gain momentum, ignoring the risks of “dovish” comments from Jerome Powell. That is why the growth of the dollar today has not received its large-scale continuation: the market fears that the 80-percent probability of a December rate hike is unreasonable, and on Wednesday the head of the Fed will disappoint traders with his indecisiveness. In my opinion, such fears are quite justified. Powell is unlikely to be transparent about the fourth rate hike in December amid an unexpected slowdown in inflation and a new round of US-China trade war.

In general, the fact of a fourth hike throughout the year was questionable – even the “hawks” of the Fed always talked about “three or four” increases within the current year. Therefore, the Fed in a sense “has the right” to show indecisiveness regarding the December round of tightening monetary policy. Too high expectations of the market can provide a disservice to the EUR/USD pair – both literally and figuratively: any manifestation of doubts about the actions in December will put strong pressure on the dollar.

Against the background of a half-empty economic calendar (today only the German report from the IFO and Mario Draghi’s speech), these market reflections led to the growth of the euro/dollar pair, despite the ambitious rise in the price of the US currency during the Asian session. With a high degree of probability, such nervousness will put pressure on the greenback until the September meeting of the Fed. The market is forced to “pay” for its high expectations about the further actions of the US central bank.