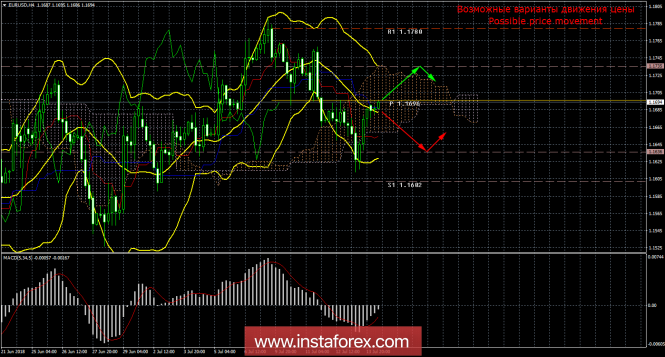 On the last trading day of the past week, the EUR / USD currency pair started rather sharply and unexpectedly, an upward movement. In other major currency pairs, there was also a weakening of the US currency, so the reasons for the fall of the US dollar should be sought in America. However, in the States on Friday there were no significant macroeconomic publications. There were not any of them in the European Union either. Thus, most likely, the reasons for the decline in the US currency are purely technical. Even Donald Trump was on the eve of a meeting with the leader of the Russian Federation, Vladimir Putin, without any new accusations and threats, confining himself only to the words “that in any case he will be criticized for meeting with Putin.” Also, the US leader said he does not understand Germany, which is a member of NATO and at the same time actively participates in the “Nord Stream-2” project with Russia, intending to pay, thus, billions of dollars for energy. Also, Trump called the European Union, China, and Russia – opponents, although he noted that he respects the leaders of these countries. The meeting between Putin and Trump will take place today in Helsinki. While it is not known what the negotiations will be about, but on the eve of their beginning, the American currency continues to become cheaper. Perhaps the market participants have bad expectations, given the fact that the US president has repeatedly been accused of excessive love for Russia. However, final conclusions can be made only after the meeting is completed and the official results of the talks are made public. From a technical point of view, the Friday target was worked out, the correction began immediately and continues. At the current bar, the price may gain a foothold above the critical line, which will enable bulls to resume movement upward.

On the EUR / USD pair, an upward correction began. Thus, today intraday is recommended to consider long positions with a target of 1.1735. The signal to the manual closing of positions will be the turn of the indicator MACD down.

Sell-positions are recommended to open with the target of 1,1636 (according to the average volatility of the instrument) if traders return below the Kijun-Sen line. In this case, the pair can resume the downtrend.