EUR / USD. November 9. The trading system. “Regression Channels”. The dollar is growing again, what will be the actions of 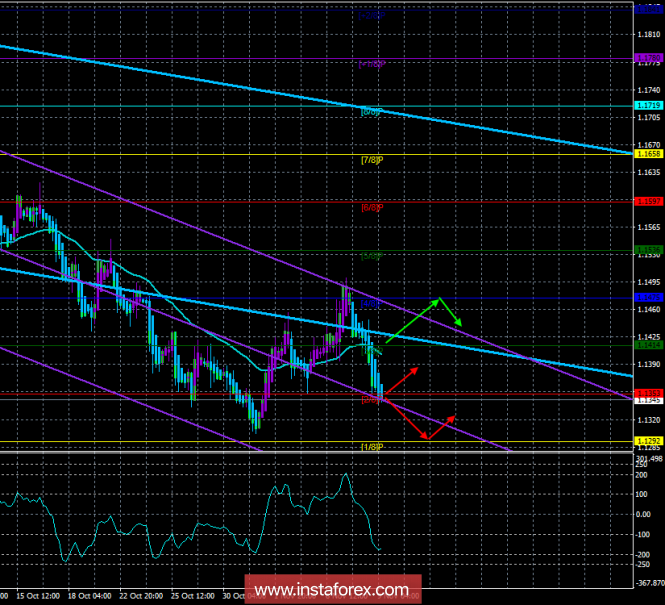 The EUR / USD currency pair on Friday, November 9, resumed the downward movement. From a technical point of view, the correction took place and ended. Thus, the way down for the pair is now open. The Fed meeting was highly expected. The key rate remained unchanged, and in the cover letter of the Fed, there were expected phrases about economic growth, good state of the labor market. In general, we have learned absolutely nothing new from the Fed. It should also be noted that at the next Fed meeting, the key rate is likely to be raised, however, traders knew this before the last meeting. A much more important point now is the resumption of the fall of the pair in itself. The miserable correction that we observed during the current week shows how weak the bull positions are now. That is, those who want to buy the euro against the background of the Italian crisis, Brexit has very little uncertainty. And this can only result in one thing, the further strengthening of the US dollar. From our point of view, Donald Trump has to go on stage. And in the near future. A strong dollar still hampers Trump and the US economy. We believe that the leader of the United States will now make every effort to reduce its course. Unfortunately, the Fed is not subservient to Trump, and further tightening of monetary policy could lead to a further increase in the dollar.

The EUR / USD currency pair resumed the downward movement and completed the level of 1.1353. Thus, before the onset of signs of an upward correction, it is recommended to trade short positions with the goal of 1.1292.

Purchase orders will again become relevant after the pair is re-consolidated above the MA. However, given the general mood of traders and the lack of fundamental information capable of supporting the euro, this option is unlikely in the coming days.

The junior linear regression channel is the purple lines of unidirectional movement.