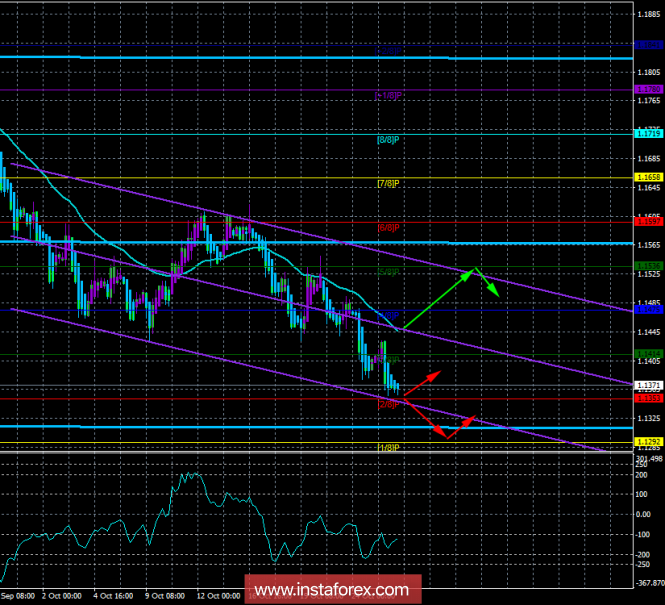 The EUR / USD instrument on Friday, October 26th, continues its downward movement after the minimal upward correction. As we expected, no important decisions and statements were made during the announcement of the results of the ECB meeting. Mario Draghi is already familiar to everyone and noted that economic growth remains stable, and risks balanced. Salaries are rising, and inflation, despite a decline in the previous month, should still remain near the target level. He also touched on the topics of the budget problem with Italy. However, in our opinion, this was not the reason for the next fall of the European currency. Despite the fact that the problem with the budget of Italy remains, it can hardly have such a devastating effect on the euro. Moreover, both the euro and the pound sterling are falling, and the fall did not start because of problems with Italy. Thus, we believe that traders simply did not receive any positive signal from the EU regulator and, accordingly, did not change their trading strategy, which means selling the euro and buying the dollar. Even a report on durable goods orders in the United States could have a greater impact on the pair than the ECB report. This figure unexpectedly turned out to be significantly higher than the forecast value (+ 0.8% versus -0.9%) and, most likely, also caused another strengthening of the American currency.

The EUR / USD currency pair continues to move down. If the bears manage to overcome the level of 1.1353, which has already been almost worked out, then short positions can be increased with the goal of 1.1292.

Buy positions will become relevant no earlier than price fixing above the moving average line with the first target of 1.1536. However, this requires a change in market sentiment, and there are still no fundamental reasons for this.

The junior linear regression channel is the purple lines of the unidirectional movement.