EUR / USD pair: plan for the US session on October 5. Unemployment in the US fell to 3.7%

To open long positions on EUR / USD pair, you need:

The increase in the number of people employed in the United States turned out to be worse than economists’ forecast. However, a decline in the overall unemployment rate to 3.7% did not lead to a serious drop in the US dollar against the euro, as a result, trades remained at the same morning levels. As for purchases of the European currency today, the most optimal area will be a weekly minimum of around 1.1463 in the second half of the day. The profit in such a scenario can be fixed at the middle of the channel 1.1500 or at the maximum of the day around 1.1541.

To open short positions on EUR / USD pair you need:

Sellers managed to prove themselves before the approach to the resistance of 1.1541, which indicates the desire to keep the pair in a downtrend. The main objective for short positions in the afternoon will be at least around the weekly 1.1463, where taking profits are recommended. In the case of the euro rising to short positions, you can again return on a false breakdown from resistance 1.1541 or to rebound from a maximum of 1.1588.

The price is stuck between 30 and 50 average, which indicates market uncertainty

Even after the release of data on the US, a surge in volatility did not occur, which plays on the side of sellers. 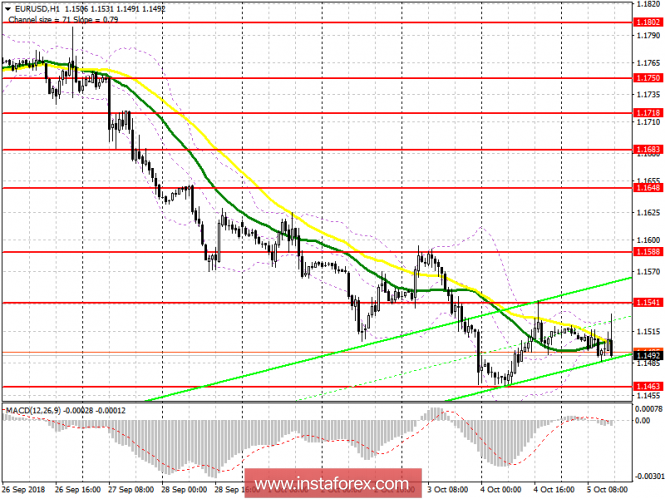