Despite all the hopes of investors that the new government of Italy will still change its plan to increase the budget deficit for 2019, as well as the talk that the European Union may influence the above decision, it quickly disappeared after the statements made the night before.

As it became known, the Italian government confirmed yesterday that it intends to achieve a budget deficit of 2.4% of GDP in 2019. The government also noted that they intend to reduce the budget deficit to 2.1% of GDP by 2020 and up to 1.8% by 2021. 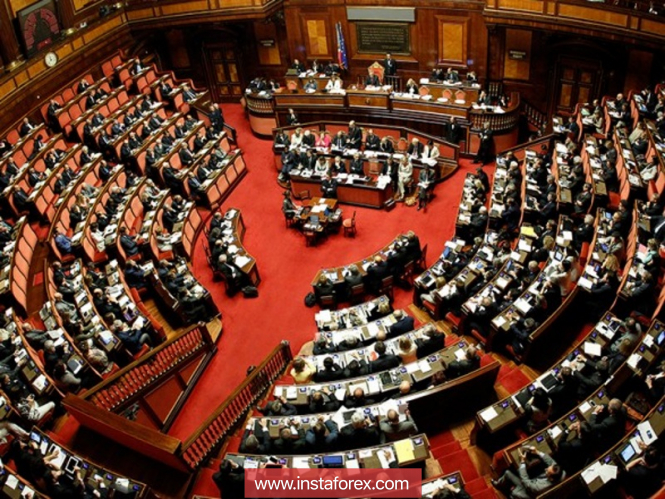 On this news, the European currency collapsed against the US dollar to the next monthly lows, continuing its downward trend.

The speech by Fed Chairman Jarom Powell also inspired confidence in traders who bet on further strengthening of the US dollar.

Powell noted that there is no reason to think that the current cycle can continue indefinitely since risks to financial stability are moderate. He also drew attention to the fact that wage growth in the United States could spur inflation, but this will not create problems for the Fed.

As for the labor market, the share of the economically active population is high, given the aging population, and a number of indicators signal that it is approaching full employment, according to the Fed chairman. Powell also gave an estimate of interest rate , saying that he is still far from their neutral level, thereby hinting that the Central Bank is not going to move away from the path of tightening monetary policy in the near future.

The US labor market is in order. According to Automatic Data Processing Inc. and Moody’s Analytics, the job numbers in the US private sector increased by 230,000 in September of this year, which was much higher than economists forecast. Economists had forecast an increase in jobs of 185,000.

The ADP noted that conditions in the labor market continue to improve, and employment in the production of goods and services in the US grew at the highest rates in September. Employment growth was also observed in all sectors of the industry.

At the current job creation rate, unemployment is expected to fall to a lower limit of 3% by this month of next year.

As for the technical picture of the EUR/USD pair, the downtrend continues. The inability of buyers today to return to the resistance level of 1.1500 will only exacerbate the situation in the euro, which will lead to the formation of a new wave of falling trading instrument in the area of minimums at 1.1450 and 1.1390.