EUR / USD. Panic in the stock markets and criticism form Trump reduced the demand for the dollar

A significant decline in US stock markets has already been called a “collapse”, but I would not hurry with such categorical conclusions. Indeed, stock indexes ended the day with a sharp fall. The Dow Jones Industrial Average fell by 830 points (almost two-month low), Standard & Poor’s 500 fell by 95 points (the strongest decline since February), and the Nasdaq Composite fell by 315 points, updating the record of this year. Despite such a significant downturn, experts are in no hurry to give in to the panic that prevails in the markets now. According to them, such a reaction was expected and even unavoidable, given the dynamics of growth in yield of treasuries, which, in turn, was due to the “hawkish” position of the Fed. In addition, stocks of the number of companies declined for their own reasons, without regard for the general fundamental background. In particular, Twitter and Starbucks fell due to negative profit forecasts, and Sears Holdings due to the retailer’s possible bankruptcy.

However, the general dynamics of stock markets alerted the traders of the foreign exchange market, especially after the comments of US President Donald Trump, who again found a reason to criticize the Fed. He said that even Chinese countermeasures do not do as much harm to the American economy as the Fed’s actions. Let me remind you that Trump has already criticized the Fed after the regulator raised the rate in July. Now his comments sound much tougher. Moreover, for the first time, the American president actually accused the Fed of provoking a collapse in the stock market.

The reason for such criticism is rather strained. It is hard to call a rollback in stock markets long overdue on the collapse, but in this context, a causal relationship is important. The growth in the yield of government bonds inevitably leads to two things. First, the cost of borrowing increases, and secondly, the demand for treasuries to the detriment of the stock market increases. And since the growth in the yield of government bonds largely depends on the Federal Reserve’s hawkish policies, it is the main “culprit” of yesterday’s events. At least, this is exactly how Donald Trump presented the situation, who, it seems, was only looking for an occasion for the next criticism of the department. 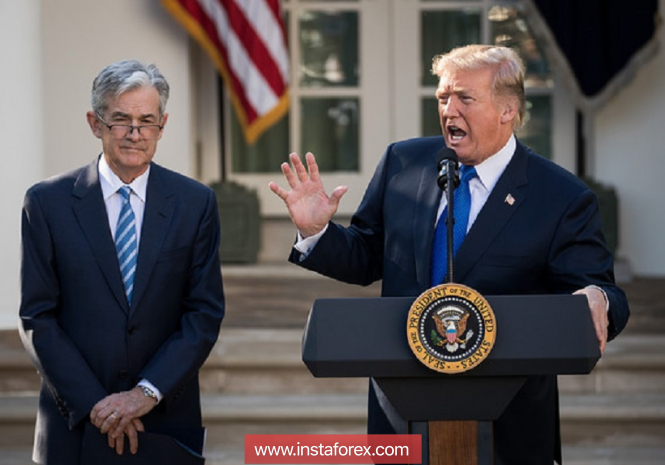 The reaction of the foreign exchange market to the statements of Trump is extremely emotional. Judging by the rhetoric of Jerome Powell and the position of the Fed as a whole, the regulator defies verbal pressure from the American president, emphasizing its independence. Moreover, Powell recently made it clear that next year, the Fed could accelerate the pace of tightening monetary policy, exceeding even the level of a neutral rate, the size of which has not yet been fully determined. Trump’s position was completely ignored by Powell, despite the unprecedented voiced accusations. Therefore, following this logic, it is fair to assume that the regulator will also ignore yesterday’s statements made by Trump.

But there is one “but”. It is likely that the Fed can independently pay attention to the relationship between the growth of the interest rate and the situation on the stock markets, especially if such collapses repeat or increase. The dynamics of the Shanghai Composite Index during the Asian session confirms the “domino effect”, which led to a general decline in global stock markets. The Chinese index has lost more than five percent, this is the sharpest collapse since February of the year before last. Therefore, the decline in the dollar is more likely to be connected not with Trump’s comments, but with the Fed’s possible reaction to recent events. If representatives of the American regulator express concern about this, then there will be no trace of the former optimism, even the December rate increase may be questionable. Finance Minister Steven Mnuchin hastened to reassure the markets, saying that we are only dealing with the correction of the markets, but his comments were not able to extinguish the traders’ emotional reaction.

In addition, the dollar was under pressure after an unexpected statement by the official Beijing. The Chinese Ministry of Commerce announced that they are ready to resume negotiations with Washington and want to settle all existing differences through dialogue. Such an unexpected turn surprised traders, after which the demand for the American currency decreased.

Thus, the general weakening of the dollar, the criticism of Trump and the decline in stock markets allowed the EUR / USD bulls to continue corrective growth. The pair is currently testing the first resistance level of 1.1550, this is the lower limit of the Kumo cloud on the daily chart. It is very likely that the price will overcome this barrier and go to the next resistance level, which is very close to 1.1580 (the upper limit of the above cloud). If the bulls consolidate above the designated targets, then the next target of the northern movement will be the price of 1.1620. This is the middle line of the Bollinger Bands indicator, which coincides with the Kijun-sen line on D1. Overcoming this level will open the way to the 18th figure, but for now, it is too early to talk about it.