EUR / USD: pastor “under lock and key”, euro flies down

The specter of a large-scale economic crisis still frightens traders, many of whom use the US dollar as the currency of the “quiet harbor.” The American currency now acts as a safe haven, where investors prefer to wait out the troubled times of uncertainty. Unfortunately, rumors about the beginning of a constructive dialogue between the US and Turkey have remained to be unconfirmed rumors with the events of the past day indicating that the political and trade conflict between the countries has not yet reached its apogee.So today, it became known that the court of Turkish Izmir refused to release the American pastor Andrew Brunson from house arrest. The judge rejected the relevant request for the protection of the American citizen and put an end to this issue, at least in the context of the immediate prospects. Although yesterday, there was information in the market that Turkey had made a political decision to release the pastor, thus showing readiness for compromise negotiations with the Americans.However, by the end of yesterday, it became clear that such conversations had no basis. First, Turkish President Recep Tayyip Erdogan announced yesterday that his country would boycott electronic goods from the US, and today, the Turkish authorities sharply increased duties on American goods. In particular, duties on alcohol increased by 140%, tobacco products by 60%, cars up to 120%, cosmetics to 60%, rice by 50%, and fruits by 20%. And this is far from an exhaustive list of American goods. Thus, Turkey responded to the decision of Donald Trump to double the duty on Turkish steel and aluminum. 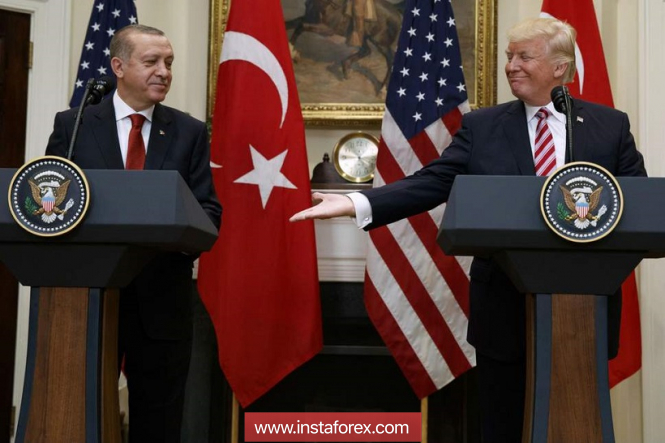 Many experts doubt that the pastor’s case is a key stumbling block. His detention soon became the last straw for the White House. The true reasons for the deterioration of relations between countries, according to political scientists, lie in the geopolitical plane: the Kurdish issue, Turkey’s refusal to support US sanctions against Iran, the criticism of Israel, and the open support for Hamas. These puzzle pieces formed into a single picture, when the Turkish court refused to release the American pastor, but only transferred him to house arrest. All this suggests that the political conflict between the US and Turkey has a deeper reason, and Pastor Brunson acts as a kind of marker. His release would serve as a signal for further dialogue on many other, much more complex, political issues.

However, reality tells us that the situation will continue to heat up to a certain limit. Here, it should be noted that neither the States, nor Europe, nor (even more so) Erdogan is not interested in the collapse of the Turkish economy. The domino effect will provoke the crisis not only in the euro area, but also affect the markets around the world. It is worth noting that the ECB has already voiced its concern about the lack of hedging of debt obligations of Turkish companies to European banks. In addition, a new wave of illegal migrants will pour into the European Union in the case of Turkey’s bankruptcy. According to various estimates, Turkey accepts about four million Syrian refugees on its territory.

As stated above, the situation is most likely to be pumped to a certain limit. Turkey is not the first to be in the forefront of foreign policy struggle. Note that there is at least a story about the downed Su-27, followed by a political conflict between Ankara and Moscow. It is also possible to recall the rather protracted conflict between Turkey and Germany, which was accompanied by loud statements, scandals and even political threats. However, the parties later found a common denominator, and the conflicts gradually “came to naught.” On one hand, this shows that Erdogan is capable of compromises, despite the previous tough rhetoric. On the other hand, the logic of precedents is not applicable to geopolitics, especially when it comes to opposing leaders such as Recep Erdogan and Donald Trump.

Thus, traders are still preparing for the situation to worsen based on the fact that the American pastor is still under house arrest in Turkey. This means that now the “ball is on the side of the US” – the White House will continue to exert pressure on the Turkish economy through various levers of influence.

The European currency, in its turn, will be fully focused on the dynamics of the development of this conflict. And if the US-China conflict has a negative impact on the European economy only indirectly, then the economic collapse of Turkey is already capable of directly hitting the banking sector of the EU.

That’s why almost all the “older” timeframes continue to signal a further decline in the EUR/USD pair. On the weekly chart, the pair is on the bottom line of the Bollinger Bands indicator and under the cloud Kumo while the indicator Ichimoku Kinko Hyo formed a bearish signal “Line Parade”. The resistance level is 1.1525. This is the lower boundary of the cloud Kumo (on W1), which coincides with the line Tenkan-sen. However, the support level is the price of 1.1250. This is the bottom line of Bollinger Bands on the weekly chart. In other words, the 1.1250 mark is still the main southern target of the downward movement.