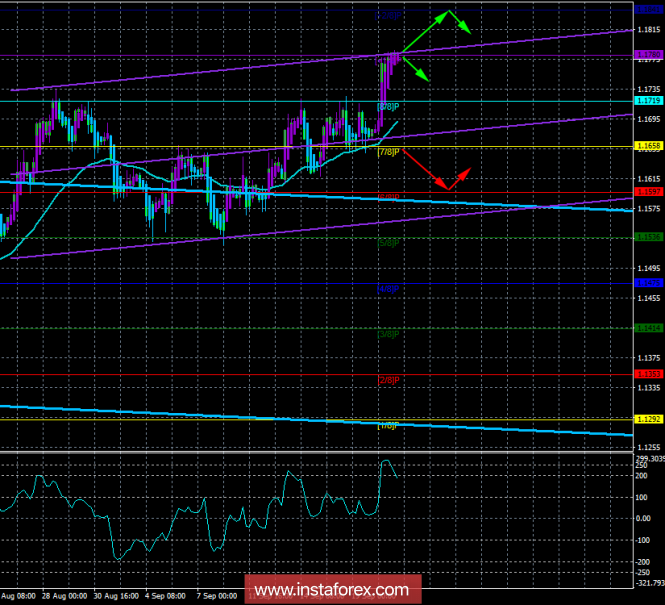 The currency pair EUR / USD on the September 20 auction soared, like the currency pair GBP / USD. Since there have been no important reports from Donald Trump and his trading partners against whom Trump is actively introducing duties, we attribute such a serious strengthening of the euro and the pound to the EU summit at which Brexit’s issues were discussed. Recall that until November, there is not so much time. Prior to the final meeting, on which the Brexit treaty should be signed, another meeting will be held between the EU and the UK. Yesterday, there were no breakthroughs in the negotiations. The offer of the economic partnership of London was rejected. French President Emmanuel Macron said that the UK wants to stay in it, leaving the EU, but it will not work. In turn, Theresa May reported that there was no counter offer on the Irish issue, which would respect the integrity of the United Kingdom. Thus, no concrete results of the talks were reached. Nevertheless, the markets responded favorably to the very fact of the talks and actively bought the euro and pound in the hope that the parties would still manage to disperse amicably. This is already another case when the pound, and now the euro, grow on rumors and expectations on the topic of Brexit. We state the fact: the key issues in which there are disagreements remain unresolved, which keeps a high probability that there will be no deal.

The currency pair EUR / USD resumed the upward movement. Thus, if the spent target of 1.1780 is overcome, then the long lines can be held with the target of 1.1841. The turn of Heikin Ashi down will serve as a signal to the manual reduction of positions.

Orders for sale will become relevant not earlier than fixing the price below the moving average with the first target level of Murray “7/8” – 1.1658. In this case, the initiative will pass into the hands of bears.

The lowest linear regression channel is the violet lines of unidirectional motion.

CCI – the blue line in the indicator window.