EUR/USD. The election is over: the dollar lost

Democrats celebrate the expected victory: for the first time in the last 8 years, they gained a majority in the House of Representatives, “winning” the Republicans’ advantage in 17 States of the country. Republicans, in turn, have to settle for little – they kept the majority in the Senate, while strengthening its presence – at the expense of Indiana and North Dakota.

Despite the fact that this scenario was widely discussed, dollar pairs reacted quite violently – the dollar index shows a negative trend, falling to 95.55 points at the moment. The yield of 10-year treasuries also “dived” under the three-percent mark, however, there is no clear trend yet. But in General, the situation is very clear – the dollar is losing ground throughout the market “in anticipation” of the divided Congress and the actions of congressmen.

In short, the results of the elections will allow the Democrats to initiate new investigations against Donald Trump and his entourage. The midterm elections are the starting point for the presidential campaign, so the Democrats will certainly not fail to take advantage of it. In addition, the key committees of the Lower House will also come under the control of the “donkeys”, which will allow the creation of a special commission to investigate the activities of the American President in his election and post-election period. Most importantly, now the Democrats can start the impeachment procedure by a simple majority (that is, half + 1 vote). And although it takes two thirds of the votes in the Senate (which the Democrats do not have) for its completion, this factor plays an important role. 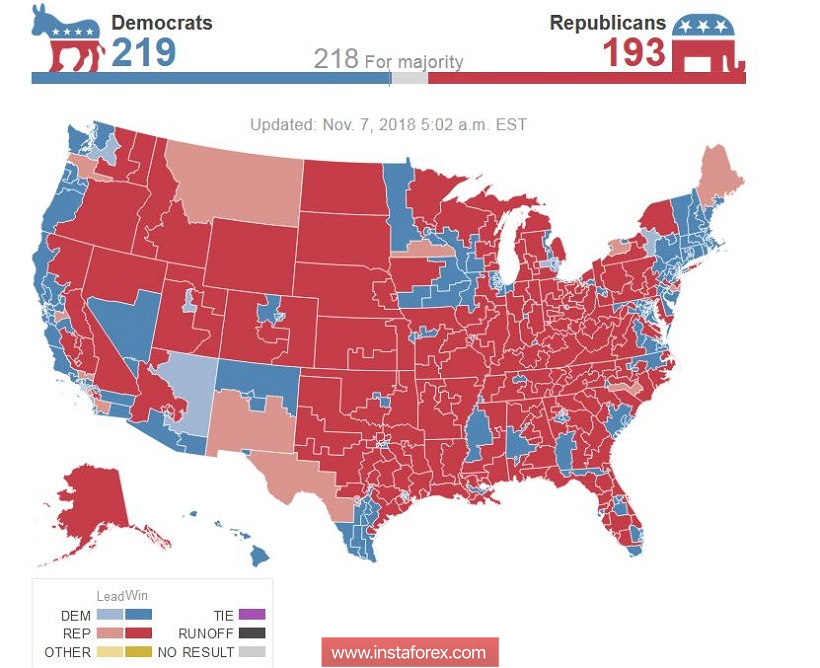 The fact is that in the entire history of the United States, not a single president left his post as a result of impeachment. In total, there have been three attempts in the history of the country: against Andrew Johnson (in 1868), Richard Nixon (in 1974) and Bill Clinton (in 1998). In particular, in the late 1990s, the House of Representatives accused President Clinton of perjury, obstruction of justice and abuse of office. After that, the deputies handed over the charges to the senators, but they did not find the necessary 2/3 of the votes. But Nixon did not wait for the verdict of the senators and voluntarily resigned as a result of the “Watergate scandal”.

According to some experts, even if the Democrats manage to launch the impeachment procedure, they are unlikely to be able to bring the matter to a logical end. However, a series of unpleasant investigations for Trump will lead to the fact that the American political system will become even more unbalanced. Moreover, this scenario is not a hypothetical discharge. Representatives of the Democratic party have already promised to strengthen the current investigation and initiate new checks, so the next two years the political situation in the United States will only heat up. It should also be noted that now the legislative initiatives of the American President will be stuck in the Lower House of Congress – and this despite the fact that among Republicans Trump also does not enjoy 100 percent support.

Thus, the split Congress and the renewed risk appetite in the market put pressure on the US currency, and in the context of the EUR/USD, the bulls of the pair received additional support in the form of industrial production growth in Germany in September: the indicator rose to 0.2% in spite of negative forecasts. In annual terms, the indicator recovered to 0.8% with the forecast of 0.2%. After weak data on the growth of the European economy, this trend inspired traders, although the upward momentum is primarily due to the weakness of the dollar.

It is worth noting that the European currency is also growing due to Brexit. The market is still receiving optimistic signs that indicate an approaching deal. And despite the fact that 90% of the incoming information is in the nature of rumors, traders are full of optimism. The pound pulls the euro, determining the upward trend of the EUR/USD. By and large, the pair of bulls can now hold only a question of the Italian budget, which is still in limbo.

From a technical point of view, the euro/dollar overcame an important resistance level of 1.1460 (the average Bollinger Bands line coinciding with the Tenkan-sen line on D1). The pair shows an upward direction, being between the middle and upper lines of the Bollinger Bands indicator on the daily chart. In addition, the pair fixed above the Tenkan-sen and Kijun-sen lines, which are under the Kumo cloud, thus forming a “Golden cross” signal, which signals a trend change to an upward one.

The closest resistance level is at 1.1560 – this is the lower boundary of the Kumo cloud. The next northern target will be the top line of the Bollinger Bands indicator on the daily chart – this is the price of 1.1610. If the pair overcomes it, prospects for reaching the middle of the 16th figure will open. The support level is the Tenkan-sen line of the Ichimoku Kinko Hyo indicator (on D1) and a mark of 1.1310.