Economic indicators show the recovery of business activity in the euro area after a half-year weakening. In July, bank lending in the euro area grew by 4.1%, the highest growth since May 2009, the growth of capital investments indicates that the business positively assesses the state of the economy.

The same conclusion was reached in the CESifo group. All three indicators assessing the business climate show a noticeable increase. Companies are satisfied with the current situation, expectations are more optimistic, business confidence is growing. 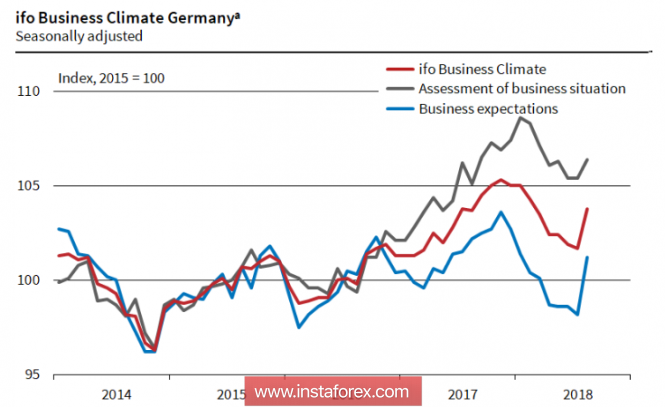 The improvement in expectations is primarily due to the positive outcome of trade negotiations between the EU and the US in July, during which the parties agreed to refrain from unilateral steps on duties. At the same time, there are fears that the agreement will be short-lived, as the American side will link it with concessions in other areas, in particular, demanding to stop cooperation with Iran.

In addition, let’s not forget that the trade war unleashed by the Trump administration is not at all spontaneous, but it is called upon to replace the falling budget revenues due to the start of the tax reform and to facilitate the repatriation of capital to the United States. In other words, the revision of trade relations is part of the strategy, and not an isolated step, and if so, then any agreements must lie within the framework of the strategy, otherwise they will not work.

In the eurozone itself, there is growing awareness that the current monetary policy should be revised. In this vein, the chief economist of the ECB, Peter Prat, spoke on Tuesday, noting the growth of a number of risks, in particular, the growth of the value of bonds and real estate prices.

On Thursday, European Commission will present its view on the dynamics of business activity in the euro area, positive forecasts, on Friday Eurostat will publish preliminary data on consumer inflation in August.

In general, the mood in the EURUSD pair remains bullish, the euro is trying to get out of the descending channel, during the day an attempt is likely to test resistance 1.1750 and gain a foothold higher.

This week the pound is trading in the sideways range, as no important macroeconomic news is published, and Monday was a day off. The reaction to the reduction in tension, provoked by the Friday speech of the head of the Federal Reserve Powell, occurred on Tuesday, when the yields on government bonds went up sharply. For example, 10-year securities had a yield of 1.277% on Friday evening, and on Tuesday opening at 1.451%, yield growth was provoked by the sale of bonds, which indicates a change in investor sentiment.

In the foreground there are still political risks associated with Brexit. Investors assess the probability of a deal at the EU summit in October as low, but they expect that by December the decision will still be found. The British government is trying to make a good face in a bad game, Theresa May told reporters on Tuesday that the lack of agreement is better than a bad agreement.

Nevertheless, lack of clarity hinders investors in financing projects in the UK, which, in turn, reduces demand for the pound. Today, GBP / USD will once again spend the day in the side range, support 1.2827, resistance is the recent high of 1.2935.

Corrective decline in the dollar index contributed to higher prices for raw materials and, in particular, for oil. The likely slowdown in Fed growth rates in 2019 is seen by the markets as a positive factor for the growth of the global economy as a whole, and so growth in demand for oil and oil products is likely.

Brent has a potential for growth in the short term to $ 78 / bbl, which roughly corresponds to the upper boundary of the downward channel of recent months. At the same time, one must proceed from the fact that the current weakening of the dollar may turn out to be temporary, and the achievement of this resistance will provoke sales.