For almost the entire day yesterday, the dollar continued to strengthen steadily, although no macroeconomic data came out. Of course, part of the market participants are preparing for the release of data on inflation in the United States, the expectations of which are quite optimistic. But the story of Brexit has contributed to the mood of investors. The leader of the Scottish nationalists said that the withdrawal of the UK from the European Union is a reason to re-raise the issue of independence of Scotland, and announced the preparation for a new referendum. Naturally, the pound began to lose its positions with a new force, followed by the single European currency. After all, this issue will inevitably lead to an increase in tension between the UK and the European Union, which will make serious and negative adjustments both in the negotiations themselves and in the final version of the divorce agreement. But at the very end of the day, the dollar began to quickly lose its position as soon as it became known that due to the approaching hurricane, oil production could be suspended in the Gulf of Mexico. Given that the dollar has been strengthening for a long time and was clearly overbought, we needed the slightest excuse for a correction, and although the news from Europe does not cause optimism, investors had enough and new horror stories about oil.

Today there are data on producer prices in the United States, the growth rate of which should remain unchanged. The main thing is that these data precede tomorrow’s publication of data on inflation, which should increase. But the incisiveness of the situation is given by the fact that inventories in wholesale warehouses should once again increase by 0.8%. But inventory data is not as important as inflation. However, do not forget about the hurricane, which has already become an occasion for the evacuation of people living on the coast. It can become a reason for further growth of oil prices, which will have a negative impact on the dollar.

Thus, there are two possible scenarios. If you look only at the statistics, the single European currency may fall to 1.1475. If the hysteria about oil production, the euro may grow to 1.1550. 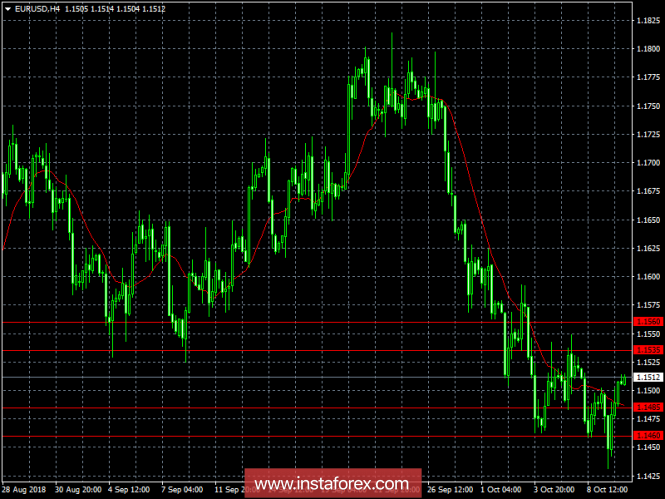