Euro: you can not build happiness on someone else’s mountain

In the international currency market, the lack of positive is not a cause for frustration. To grow yourself without any internal drivers, you need to make the opponent feel bad. The dynamics of core inflation in the euro area still leaves much to be desired, consumers are worried about the possible loss of jobs, and the approach of the date of submission by the eurosceptic government in Italy of the draft budget retains political risks. Still, EUR / USD closes in the green zone for the third week in a row, and Commerzbank expects the continuation of the rally in the direction of 1.26. ABN Amro claims that the level of $ 1.15 is the bottom for the euro.

On another’s hump in paradise you will not enter, but at the uniform European currency while it turns out. Fears about the slowdown of US GDP in the second half of the year and because of a possible slowdown in the rate of normalization of monetary policy by the Fed force speculators to get rid of the US dollar. Theoretically, they should not be frightened by the statement of Donald Trump that the Central Bank puts the sticks in the wheels of the US administration. First, the Federal Reserve is independent, and no one Jerome Powell before 4 years from office will not remove. Secondly, everyone should do his job. The president – to deduce the economy on the promised + 3%, the Fed – to fulfill a double mandate.

In this regard, the first inflation rate in the face of the basic PCE for the last 6 years to target at 2%, the minimum unemployment rates in half a century and the acceleration of GDP to 4% and higher are weighty arguments in favor of continuing the cycle of normalizing monetary policy. Another thing is that the fiscal stimulus is most likely to have a temporary effect, so investors are not in a hurry to throw off 10-year Treasury bonds. The rates on them are stable, while the growth of rates for 2-year bonds pushes the yield curve to the red zone. And inversions, as is known, for the last 50 years were a fairly accurate signal of a recession.

The dynamics of American inflation 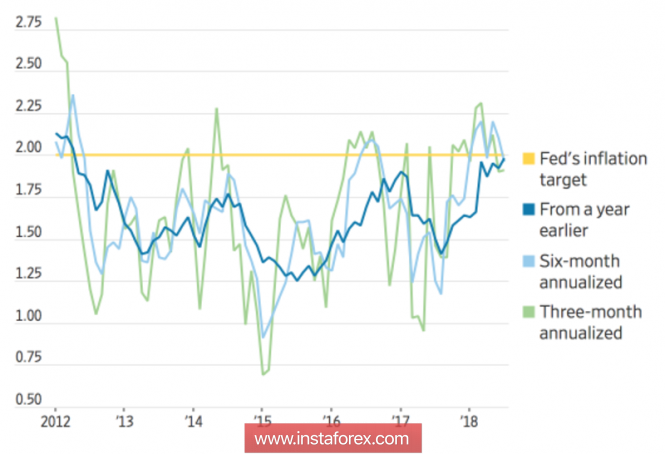 Thus, the more the Fed will tighten monetary policy, the higher the chances of an economic downturn. The only way out is to stop. But the futures market is 72% sure that we are waiting for a couple more rate increases on federal funds (in September and in December). And what if this does not happen? Suffice it to recall the events of 2016. Then in early January, investors counted on three acts of monetary restriction, but in fact, they got one, and if it were not for Trump’s victory in the presidential election, the dollar would have finished the year in the status of an absolute outsider.

The problem is that the divergence in monetary policy is not the only trump card of the US currency. Protectionism and panic in the markets of developing countries support it no worse than raising the rates of the Fed. So it’s too early to talk about the recovery of the long-term “bullish” trend for EUR / USD. Business smells of consolidation.

Technically, the break of the upper limit of the trading range 1.15-1.179 and the activation of the pattern “Shark” will increase the risks of implementing its target by 88.6%. 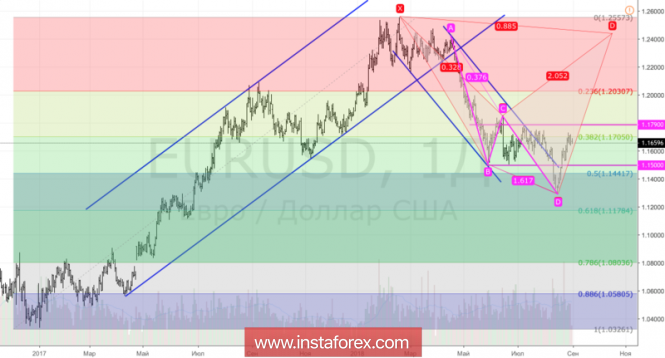