Europe lose in the trade dispute with the US

Negotiations on trade duties between the US and the EU ended. It seems that D. Trump managed by exerting pressure on European trading partners to achieve significantly greater preferences for American companies.

The trade agreement between the States and the EU continued until the evening and showed again the entire dependence of Europe on America. Manipulation of Germany’s interests primarily in trade with the US, as well as the use of political pressure allowed D. Trump in the negotiations with J. Juncker to press the interests of American business. First and foremost, we mean the increase in LNG supplies to Europe, as well as soybeans, for which the Chinese market was lost because of the Beijing-Washington trade war. And, the American president at a press conference dreamily noted that they will only increase the supplies.

On the wave of the meeting results, American stock indices revived. The local business was pleased with the news from Europe. While the Europe once again had to “wash up” in the hope, and this fully applies to Germany that Trump will leave the car exports to the States alone. But this topic was placed beyond the brackets of the agreement, so there is no certainty that it can leave for new preferences in trade disputes with Europe. It seems that the EU is “hanging” from the American president on the hook, which significantly reduces its ability to maneuver.

On the wave of news about the agreement, the single currency received short-term support, as the agreement eased the tension in the trade relations between Washington and Brussels, but it is not to say that difficult times have ended. Proceeding from this, we believe that after the results of today’s ECB meeting on monetary policy, the regulator would likely maintain its concern over the consequences of the trade conflict with the US. At a press conference, ECB head M. Draghi will make it clear that the process of increasing interest rates will begin in the first half of next year. If our expectations are confirmed, then the euro/dollar pair may be under considerable pressure, although in general it will remain in the side range amid geopolitical instability the factor of trade wars.

The EUR/USD pair is trading under the 1.1750 level waiting for the result of the ECB monetary policy meeting. The positive attitude of the ECB following the meeting may push the pair up to 1.1800 after overcoming the level of 1.1750. At the same time, the concern about the conflict has not disappeared between the EU and Washington could lead to a price drop to 1.1670 after overcoming the level of 1.1720.

The AUD/USD pair is trading below the 0.7465 mark. The pair was pressured due to possibility that the RBA will start raising rates to 2020. If the price falls below the level of 0.7430, it will have the potential for a local decline to 0.7365. 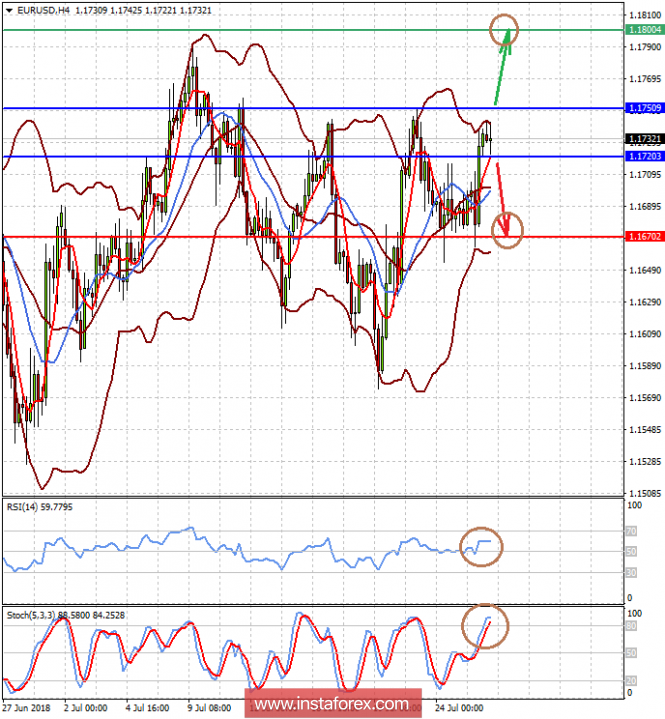