EURUSD: The career of the current Fed Chairman Powell is under threat. The Fed pose a threat to the US economy.

If earlier the US president did not get personal, in yesterday’s interview for Fox Business, Donald Trump decided to change his principles. We are talking about the Chairman of the Federal Reserve Jerome Powell, as well as some representatives of the committee.

The Fed poses a threat to the American economy 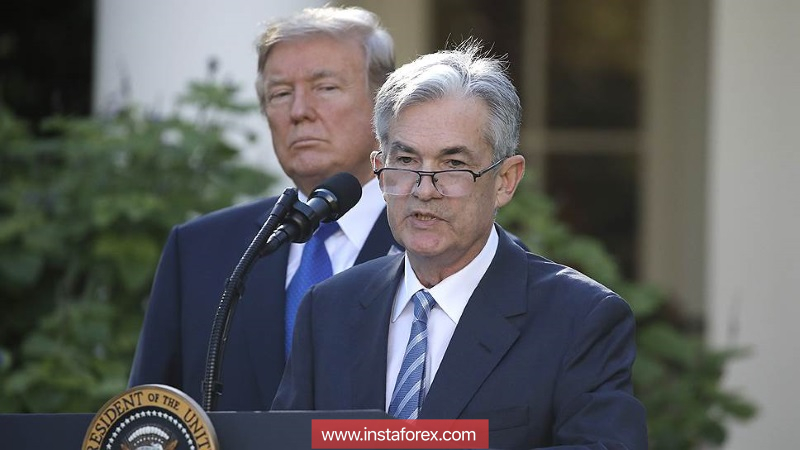 Trump said that the Fed’s actions pose a threat to the US economy, as it raises interest rates too quickly. The US President also drew attention to the fact that the Fed is too independent, directly hinting that in the near future this situation can change dramatically. Donald Trump also said that he does not really like what Fed Chairman Powell does, as well as a couple of people in the US central bank.

Such statements by the US President were made for the first time since Trump took office. Representatives of the Fed have repeatedly noted the importance of the independence status of the committee, but, apparently, everything comes to an end sooner or later.

The main problem now for the US President is to prevent a slowdown in economic growth, which will pull down a lot of other economic indicators and cause a lot of discontent. And along the way is the Federal Reserve, which continues to raise interest rates, fearing overheating of the national economy and a sharp jump in inflation, which in turn slows the flow of cheap money to the market, contributing to the stimulation of economic growth.

The speech of Mary Daly, the new head of the San Francisco Fed, was quite predictable.

Daly said that the US economy is not overheated or cooled, and the Fed’s task is to maintain this level. Of the advantages, Daly noted that the US has a very rapid GDP growth, the labor market is at its peak, and inflation is near the target of 2%.

Daly also drew attention to the fact that it makes sense for the Fed to gradually raise interest rates, but did not say how she would vote at the November meeting of the Federal Open Market Committee.

Yesterday afternoon, a number of data was published, which did not allow the euro to break through above key resistance levels.

According to the report of the US Federal Reserve, industrial production in the US in September this year again increased by 0.3% compared to the previous month. Economists had forecast production growth of 0.2 percent in September. The strongest growth was in the mining sector, which gained 0.5% in September.

High demand for housing against the background of a gradual rise in the cost of borrowing, as well as good economic growth motivate builders. The indicators are negatively affected by prices, which continue to update the highs.

As for the technical picture of the EUR/USD pair, it has not changed.

The result of the bears is a return to the level of 1.1570, which is now necessary to keep. If this is done, the pressure on risky assets will remain, which will lead to the test and the breakdown of the lower limit of 1.1535 with a sell-off in the area of 1.1490. If buyers return to the level of 1.1570, we can expect a second wave of growth of the EUR/USD with the breakdown of the upper limit of 1.1605 and a large increase to the high of 1.1650.