Everything is good, and even better: the head of the Fed hinted at an acceleration of the rate increase

The American currency is at the height of glory. The dollar is in high demand against the background of a record increase in the yield of 10-year treasuries to perennial highs, as well as due to increased geopolitical tensions in the world. The dollar index settled at 95 points, and most likely will not stop its growth until the end of the week, unless Nonfarm does not disappoint traders. But, judging by the latest report from the ADP agency, the labor market is in excellent shape, like many other elements of the American economy.

According to data published yesterday by ADP, in September, 230 thousand jobs were created. These figures are much higher than the forecast level (185 thousand), which reflect the most effective increase since February of this year. In addition, the agency’s experts revised the August data upwards, confirming the positive dynamics of the labor market. It is worth noting that the data from ADP do not always find their confirmation in the official release of Nonfarm but at the same time, they correctly indicate the general dynamics of the indicators.

And although lately, traders are cool about the reports of this agency, yesterday, the dollar bulls took advantage of the excuse and increased the demand for greenbacks. Moreover, the positive picture of the day was reinforced by another indicator, the ISM composite index for the non-production sphere. This indicator unexpectedly jumped to 61.6 points, this is the strongest result in the last 20 years. Such an abnormal dynamics could not be ignored by the market, so the dollar strengthened its position over the course of yesterday.

However, the main reason for the dollar appreciation throughout the market lies elsewhere. The US currency yesterday received strong support from Fed Chairman Jerome Powell, who this week announced his position for the second time publicly. Yesterday’s speech confirmed the assumptions of analysts that the Fed is preparing the market to accelerate the pace of tightening monetary policy. If in his first speech this week, Powell only positively assessed the dynamics of economic growth. Yesterday, he said that the regulator “is still far from the level of neutral rates.” This is a very important phrase, which largely lowered concerns that the Fed would soon pause the process of normalizing monetary policy. 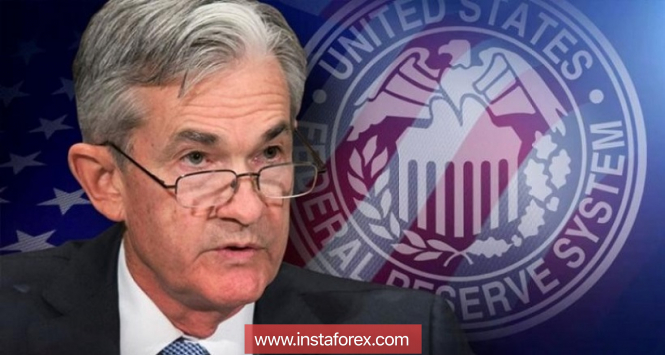 It should be recalled here that the debate about where this notorious neutral level is located, at which monetary policy does not slow down, but does not disperse the economy, has been going on for a long time (including among Fed members), and the likely bar is gradually increasing. If at the beginning of this year, members of the regulator said that this level is “just below three percent,” then later, most of them agreed that the three percent target would still be exceeded. At the moment, their estimates are in the range of 2.75-3.5%. The position voiced yesterday by Powell suggests that the regulator is leaning towards the upper bar of the above range, and this means that next year, the rate of increase may be increased.

Moreover, at the last meeting of the Federal Reserve, Jerome Powell admitted that the regulator could exceed the level of the neutral rate, “if the economic situation demands it”. Yesterday, he repeated this phrase along with other theses of a “hawk” character. For example, he stated that the negative effects of the trade war between China and the United States “are not yet observed,” and inflation is in the target 2 percent level, amid a record-low unemployment rate. Summarizing his speech, Powell stressed that he was “extremely pleased” with the current state of the American economy.

It is not surprising that after such a “luscious” performance, the yield on 10-year-old treasuries jumped to 3.202%, updating the 7-year maximum. The results of the September Fed meeting and subsequent speeches by Jerome Powell suggest that the regulator will exceed market expectations and take a tougher stance next year. The head of the Federal Reserve did not mention either global risks or weak wage growth rates, focusing only on positive aspects. Such unambiguous signals were perceived by the market accordingly, intensifying the demand for the dollar.

Thus, Jerome Powell gave impetus to the next rally of the American currency. If tomorrow, Nonfarm does not disappoint the market, then the dollar will receive an additional reason for strengthening. Now, the strong figures of key indicators will be viewed through the prism of the intentions of the Fed chairman to accelerate the rate of increase.

From the point of view of technology, the EUR / USD currency pair on the daily chart is in a downward channel, as evidenced by the price location under all the lines of the Ichimoku Kinko Hyo indicator, which formed the bear signal “Parade of lines”. In addition, on D1 and W1, the pair is between the middle and lower lines of the Bollinger Bands indicator, which also indicates the priority of the southern movement. The nearest support level is at 1.1420 (the bottom line of the Bollinger Bands indicator on the weekly chart). If the bears consolidate under this mark, then the next support will be the price of 1.1301, this is the price minimum of this year.