FOMC does not give new benchmarks

As expected, the Fed raised a 0.25% key rate at the meeting that ended on Wednesday. The updated macroeconomic forecasts completely coincided with the expectations of analysts, and the definition of the monetary policy as “accommodative” has disappeared from the text of the accompanying statement, which means a planned change in rhetoric following the policy change.

As Fed Chairman Powell said at a press conference, the current rate level is still below neutral. Forecasts on the rate have not changed. One more step this year, three in 2019 and one in 2020, so that the rate rose to 3.375%, this is the target for the markets. 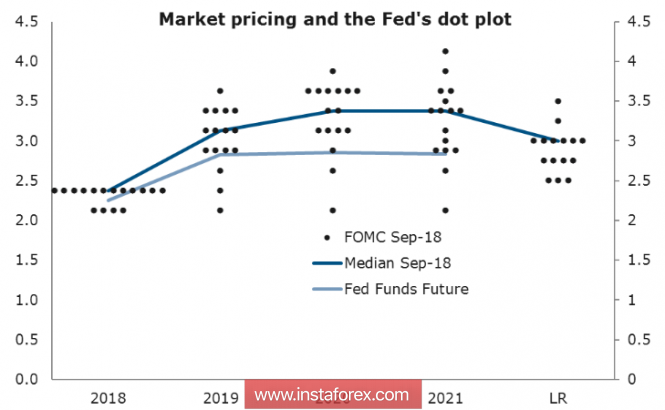 The forecast for GDP growth for 2018 was increased from 2.8% to 3.1%, and in 2019, from 2.4% to 2.5%, the unemployment rate was slightly adjusted for the current year from 3.6% to 3.7%, the remaining forecasts remained unchanged. Markets quietly reacted to the results of the meeting, the rate for 10-year US government bonds fell slightly.

The Fed actually operates on autopilot, in strict accordance with the schedule laid down a little while ago, and if the macroeconomic situation does not change decisively, there is no reason to wait for changes in monetary policy. Such an approach helps strengthen the status of the dollar across the entire spectrum of the market, this deterioration may be hampered either by a worsening of the economic situation in the US, or by the beginning of a policy of tightening by other Central Banks.

Some weakening of the euro as a reaction to the results of the FOMC meeting was expected, but a significant decline is unlikely. The rate of the Fed on the rate increase and the reduction of the balance sheet will support the dollar and push EUR / USD to 1.15, but the ECB feels much more confident than 3 months ago, as business activity in Europe at high levels and key macroeconomic parameters, unemployment and GDP growth, demonstrate positive dynamics. Until the end of the year, the ECB will complete the asset purchase program, but will retain the practice of reinvesting in government bonds, which will support the economies of the euro area countries.

The support for EUR / USD 1.1670, a stronger decline is unlikely. On Thursday, the euro will be under slight pressure, trade will predominantly go near current levels.

The Brexit factor remains the key to assessing the prospects of the British pound. Despite the fact that the next negotiations ended in failure, the chances of a worthy exit from the situation are still there. Earlier, the markets were oriented to October. Now, the expectations are postponed to November, the time is still enough to find a compromise solution.

The key contradiction is not at the Irish border or in the trading environment after March 2019. The key issue is political. The idea of holding a second referendum will not be realized, since the UK’s course for secession from the EU was programmed long before June 2016. It should be recalled that on May 27, 2015, the Queen of Britain made a message about the need for such a referendum, which clearly indicates the existence of a political plan, rather than on uncertainty. The referendum only legitimized the earlier decision.

This decision is possible only in one case, in the expectations of political changes in Europe and the desire of London to accept the capital fleeing from Europe. If Europe looks better both politically and economically, the meaning in Brexit disappears altogether, this is the main contradiction that does not allow the transaction to be completed. In the middle of 2016, the United Kingdom, the United States, and the euro area had roughly the same growth rates of GDP, but then the economies of the eurozone and the US went up, which gave the Central Bank the right to begin a policy of normalization, while for the Bank of England plans to raise the rate by a quarter percent look like a clear false start.

The pound has no advantage either before the euro or before the dollar. The fall of the pound after Brexit has long been perceived as temporary, but it may happen that the low pound rate will become the norm, and not an exception, at least in the medium term, along a series of key parameters, GDP growth, inflation, labor market, the UK lags behind what will be to create additional difficulties for the Bank of England in the implementation of long-term plans.

Today, GBP / USD is likely to trade in the lateral range, limited by recent extremes of 1.3053 – 1.3297, with some gravity toward the lower border. The chances of a pronounced directional movement are small, volatility is expected to be low.