The protocol of the FOMC meeting, published on Wednesday, did not contain any surprises, confirming the intention to raise the rate in September. The markets did not react to the publication of the protocol.

On Thursday morning, the probability of a rate increase, according to the CME futures market data, is 96%, which can be considered a sign of complete unanimity. The outlook for December is more cautious, as long as the probability of an increase is 66.1%, that is, the market lays fears in its expectations about the negative dynamics of some important US indicators by the end of the year.

The first such indicator is inflation. At present, the markets are almost unanimous in that inflation in the US is growing, however, by some indications, this growth is far from being so convincing. The yield on the 5-year inflation-protected bonds “Tips” peaked at 2.16% on May 16, but then declined for three months, as of August 20 it fell to 1.95%, which is a minimum of more than 4 months . The profitability of Tips reflects the real view of the business on inflation processes, that is, at the moment the business is focused on slowing the growth of inflation.

Two other indicators, GDP growth and the labor market, still look confident, the risks look balanced, and the negative in the emerging markets in the text of the protocol was almost bypassed. The trade wars were elucidated in the key of the increased uncertainty of their influence on further measures of monetary policy, and the importance of the inversion of the yield curve was ignored by the FOMC members.

Thus, the FOMC rate remains stable, there is no reason to revise it, this is the most important conclusion from yesterday’s protocol. This position automatically means orientation to a strong dollar, which should lead, among other things, to the compression of the monetary base (DB). 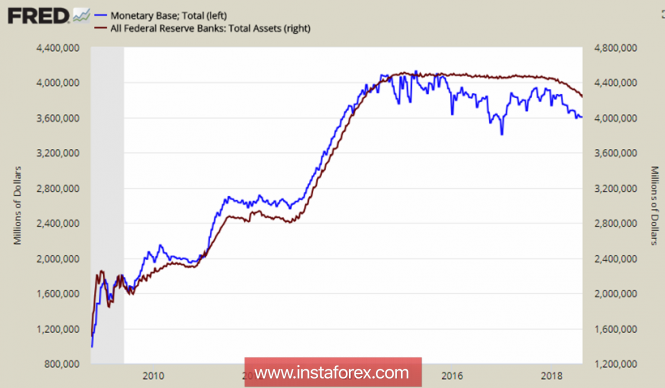 The contraction of DB in December 2016 led to a serious panic in the markets and a sharp increase in the dollar index. At the moment, the reduction of DB is not observed, although taking into account the correlation between DB and the balance of the FRS, this is inevitable.

Thus, objective factors indicate that the dollar should continue to grow in the long term. At the same time, it should be borne in mind that the continuation of the policy of the Fed will lead to an increase in the problems of emerging markets due to tightening of financial conditions.

Tomorrow at the annual symposium in Jackson-Hole, Fed Chairman Powell will speak, which will reveal the theme of “monetary policy in a changing economy” from the point of view of the Fed. Speech can lead to increased volatility. Also on Friday, you need to pay attention to the publication of data on orders for durable goods in July.

For the pound are the same levels as the day before, resistance 1.2955 and 1.3050, strong movement is unlikely, the pound will be traded in the range with a tendency to increase.

Oil continues to rise after the release of data from the US Energy Ministry, which showed a significant reduction in inventories. Brent closed the day at 74.90, the growth was 2.9%, today during the day there may be a corrective decrease to 73.50, this is the nearest significant support.

The ruble is subject to strong and large-scale pressure from the US, which is probably tied to the upcoming November elections to the Congress. Again on the agenda is the threat of a ban on trading in Russia’s sovereign debt and on transactions with state-owned banks, prospects remain uncertain, there are no weighty reasons for waiting for improvement.

At the same time, the threat of new sanctions being introduced in their most severe form seems unlikely, and extreme scenarios for the ruble are not realized. As long as the pressure continues, the ruble will softly devalue, remaining within the range close to current levels. Until the end of the week, the ruble is likely to rise above 69 rubles / dollar.