On Tuesday, the euro expectedly rose to the upper limit of the range of 1.1654-1.1750 and from there, it moved in the opposite direction on the current good US economic indicators and the expectation of subsequent events. But the first news that delayed the euro was eurozone GDP that was released in the second quarter, growth was below the forecast, 0.3% against 0.4%. The personal income of consumers in the US in June increased by 0.4%, personal expenses also increased by 0.4%, the data came out at the level of forecasts. A nice addition was the index of business activity in the manufacturing sector of the Chicago region, which showed the July rise to 65.5 from 64.1 with 61.9 expectations. Consumer confidence increased from 127.1 to 127.4, the forecast was 126.5.

Today, US Manufacturing PMI will be released from the ISM Institute in July, the forecast assumes a fall from 60.2 to 59.4, but yesterday’s Chicago index data give grounds for the best result. The change in the number of jobs in the private sector according to the ADP for July is expected to 186 thousand against 177 thousand in June. At 19:00 London time, the FOMC Federal Reserve announces a decision on monetary policy. No change is expected. Even the head of the Fed, Jerome Powell, who was previously going to give a press conference after each FOMC meeting, will not speak after today’s meeting. 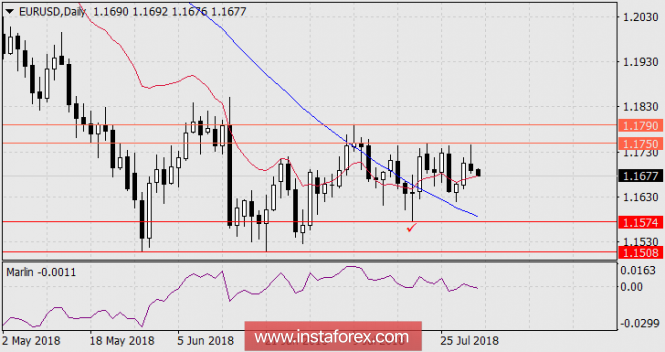 Technically, the price went to the combat position to attack the level of 1.1574, this is the low of July 19 and the support of the Krusenstern trend line (blue) on the daily chart. This readiness is indicated by the transition of the Marlin signal line to the negative number zone and the pure bearish signal on the four-hour chart. 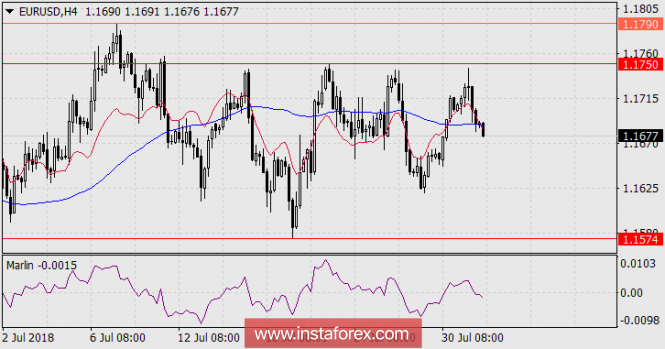 Here, the price went under the red balance sheet and the trend line, the oscillator Marlin also moved into the zone of negative numbers. The success of the price will be accompanied only by a rapid downward movement to overtake the balance line on the daytime, in which case the price will be fixed under it and facilitate further decline.