Last Friday, the markets could not resist the crisis in emerging markets and the euro fell by 115 points – investors massively bought the dollar and as an additional insurance left their stock market – the S&P 500 fell by 0.71%. It is interesting to see President Trump’s emotional assessment of this situation: “I just ordered double the tariffs for steel and aluminum against Turkey. Their currency, the Turkish lira, is falling rapidly compared to our strong dollar! ” This means that the previous statements of Trump about the excessive strength of the dollar, the unprofitability of the exchange rate, and so on were in fact disorienting messages, as we have repeatedly said. However, there is strong concern in the European banking sector, as its integration with Turkey is strong enough, and this has an impact on the euro. Also of concern is the political situation in Italy, where there is a threat of the resignation of the pro-European finance minister Giovanni Tria. 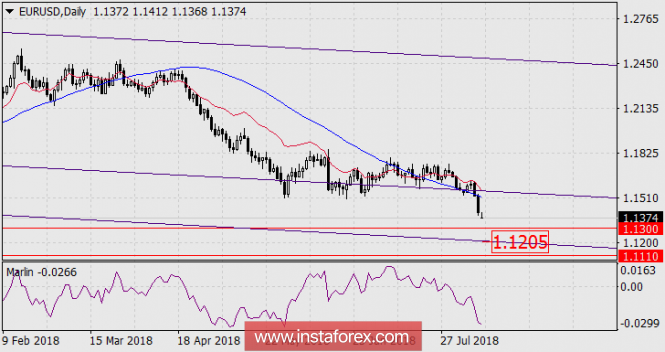 Now the nearest target of the single currency is the price level of 1.1300 – the peak of November 9, 2016. The second goal may be to support the downward line of the price channel of the weekly scale of 1.1205. 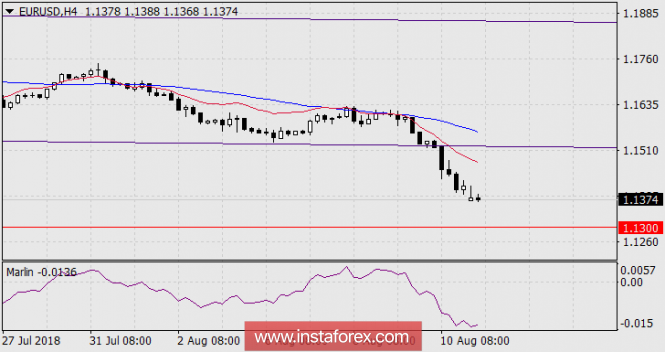 On the four-hour chart, there is nothing to prevent a strong decline in the euro – the Marlin oscillator does not show signs of a reversal, the balance indicator line of the price (red) is only gaining momentum. Tomorrow, the eurozone will have important economic indicators: GDP, industrial production, ZEW indices, but the forecasts for them are mixed.