On Friday, Europe’s economic indicators came out worse than expected, and the US mixed, but the main focus of the market on employment showed an increase in the indices and the dollar strengthened against major currencies. Services PMI of the eurozone in the final assessment for July was lowered from 54.4 to 54.2. Industrial production in Italy in June added more than the forecast (0.5% against 0.4%), but retail sales fell by -0.2%, with the expectation of growth of 0.1%, which eventually lowered retail sales throughout the entire euro area – an increase of 0.3% against the forecast of 0.4%.

In the US, the number of jobs outside the agricultural sector in July increased by 157 thousand against the average expectation of 191 thousand, but over the previous two months the indicator was revised for an increase of 59 thousand. As a result, the unemployment rate dropped from 4.0% to 3.9%. A good signal was the increase in hourly wages by 0.3% against the background of employment growth, the expectation was 0.2%. The employment structure showed a growth in quality: with a reduction in employment in the public sector by 13 thousand, in the manufacturing industry 37 thousand jobs were added. 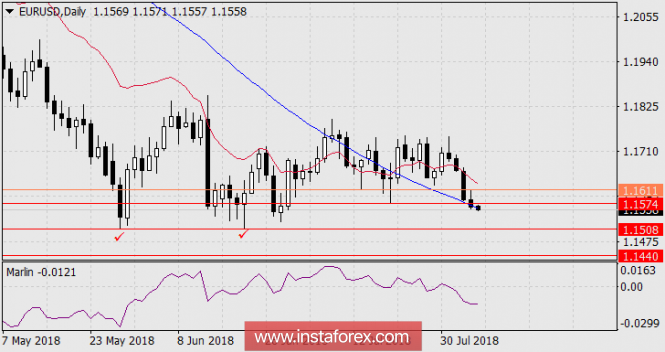 On Friday, the price closed under the trend line in the daytime, this morning the pressure on the support does not weaken, which is helped by the consolidation of the price under the level of 1.1574. We expect the euro to decline to a more pronounced level of 1.1508. The industrial orders in Germany for June, coming out today, can help the price, by -0.3% against the 2.6% growth a month ago. 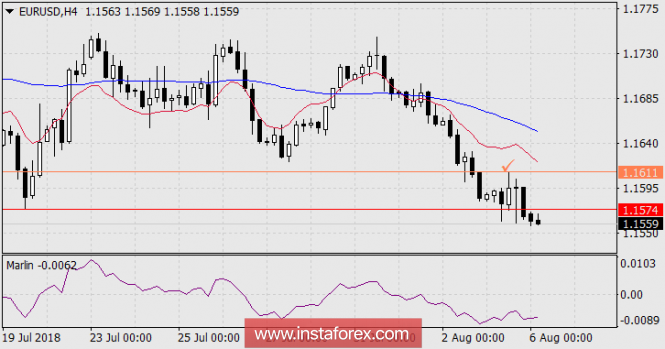 A small sign of a possible correction is the convergence of the price with the Marlin oscillator on the four-hour chart, but the convergence is small in size, about 8 bars, so it is unlikely that the price will be able to overcome 1.1611, where the balance indicator lines on both scales aspire.