On Monday, the euro fell by 25 points. Canada joined the trade agreement on the updated NAFTA, now this association is called USMCA. And that’s a victory for Trump. The contract will be signed on November 29-30. Perhaps the strengthening of the dollar would have been more significant if economic indicators had not failed. Construction spending in the US in August increased by only 0.1% against the forecast of 0.5%, business activity in the manufacturing sector in the ISM estimate for September fell from 61.3 to 59.8 points. According to Markit Manufacturing, PMI remained at the previous value of 55.6. In the eurozone, the unemployment rate fell to 8.1% from 8.2%.

Today, the main event may be the speech of the Fed chief Jerome Powell (16:45 London time) on inflation and employment. Obviously, monetary policy will have an important place in this speech, as the Fed’s main focus are the areas of employment and inflation. At the moment there are no risks in these areas, the speech can be neutral and optimistic. 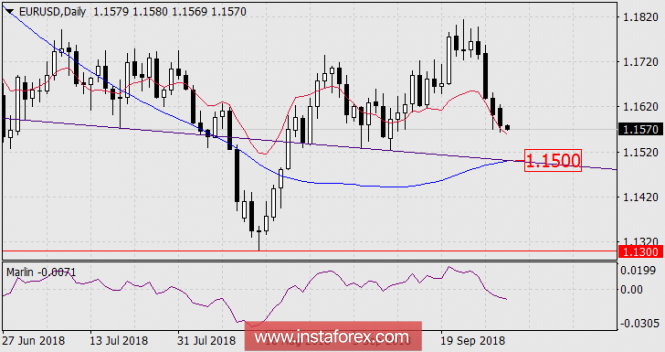 On the daily chart, the price slides along the balance line. Formally, the balance is neutral. But the line itself is directed downwards, which indicates a balance striving towards lower levels; conventionally, the price balance can be around 1.1500, where the trend line of the price channel and the indicator line of the trend converge at one point. Overcoming the price of this key mark opens up significant prospects for its further decline (1.1100). 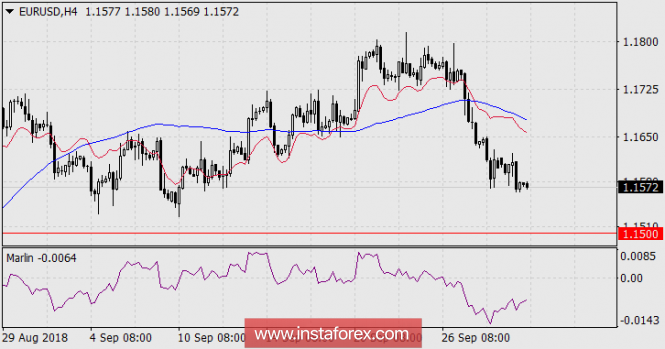 On the four-hour chart, the signal line of the Marlin oscillator has grown slightly, but in this situation it can be interpreted as discharging the indicator before further decline.