On Thursday, the euro lost 56 points on the strengthening of US trade disputes with China. The dollar strengthened against most of the global currencies since the dollar has a strong fundamental positive. But macroeconomic indicators of the dollar yesterday summed up. Sales of new homes in July, as we expected, went worse than the forecast of 627 thousand against 643 thousand. The PMI manufacturing in August declined from 55.3 to 54.5, while PMI fell from 56.0 to 55.2. In the euro area, the PMI indexes came in mixed as the Manufacturing PMI declined from 55.1 to 54.6 and the Services PMI increased from 54.2 to 54.4. The dollar was supported by the head of the Federal Reserve Bank of Kansas City Esther George, who said that the Fed would raise rates, despite the president’s discontent. 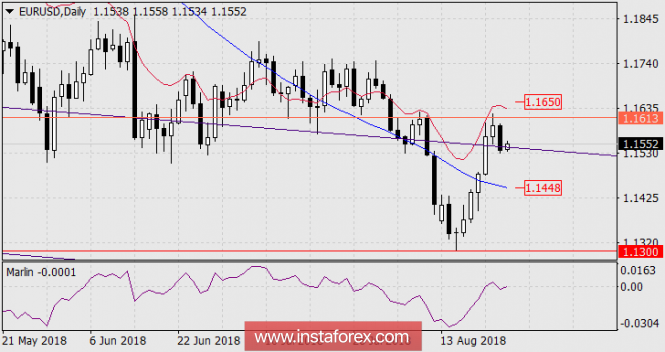 The decline in the euro was delayed by the downtrend, which is embedded in a large price channel of a monthly timeframe and began at the maximum in July 2008. The signal line of the Marlin oscillator is on the zero line at the boundary of two zones where there was growth and decrease. Also on the H4 graph, the signal line is located on the border of two zones. In this situation, the euro can still grow. 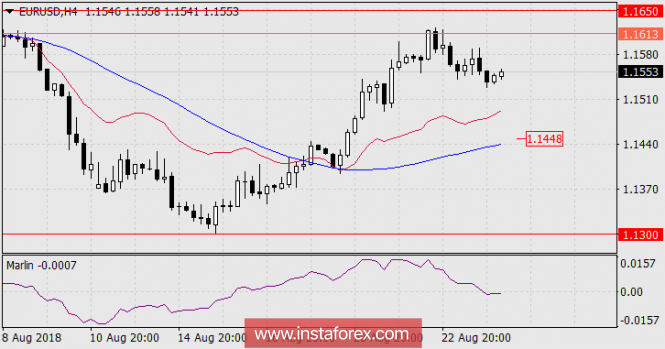 Today, the volume of orders for durable goods in the US is expected to decline by -0.7% in July. Investors can work out yesterday’s negative on macrostatistics if the mood shifts in the opposite direction as the stock market fell by 0.17% at S&P 500 yesterday.

Also, Jerome Powell’s speech at Jackson Hole will begin at 14.00 London time today and no loud statements are expected.

Thus, the euro is far from exhausted on its potential growth, at least making it looks like a technical picture. In case of growth, the price will tend to overtake and surpass the balance line above 1.1650. However, if it fixes below the trend line, it is possible to decrease in the MACD line on the daytime to 1.1448. This price tag coincides with the MACD line and on yesterday’s 4-hour chart with strong support at 1.1452.