On Thursday, European investors were disappointed with data on Germany, where the volume of industrial orders fell by -0.9% in July against expectations for growth of 1.8%. This was the initial impetus for the euro to fall. In the US, the change in the number of jobs in the private sector from ADP showed an increase of 163,000 in August against the expectations of 195,000. However, this indicator in recent years has been weakly correlated with “non-pharma” and jobs outside the agricultural sector are more dependent on weekly applications for Unemployment benefits. Yesterday they were historically low as 203,000 (since 1970). The index of business activity in the non-manufacturing sector from ISM increased sharply from 55.7 to 58.5 for August while the forecast was 56.8. He summed up only the volume of factory orders, which fell by -0.8% in August against the forecast of -0.5%. 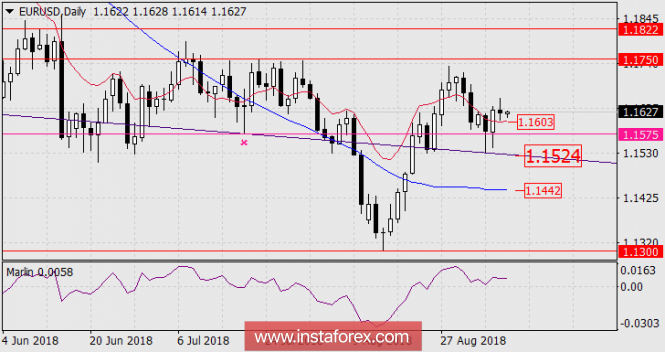 In the case of really good data on Non-Farm Employment Change and the forecast of 191,000 against 157 thousand in July, we are waiting for the price to be overcome at the level of 1.1575 (July 19 minimum) and we are waiting for a decrease to support the trend line to 1.1524.

We consider this as the main scenario, but the probability of an upward price increase is increasing. First of all, the role of the US-Canada talks on NAFTA is growing. President Trump expected the achievement of some agreements today. Yesterday the negotiators worked all night, but it may very well be that no agreements will be reached. Also, even with good non-businesses, the euro can go up. According to the indicators, the current situation is increasing. Even at H4, even if the price is below the balance lines and MACD line the Marlin oscillator is still in the growth zone and there is no convergence with the price. 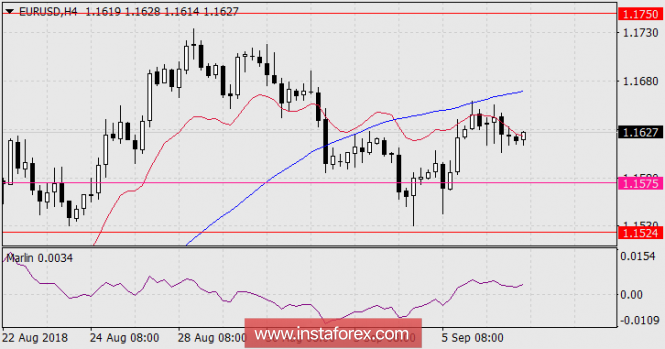