The British pound fulfilled our forecast yesterday with a version of the triple convergence with the oscillator Marlin. The price declined, and Marlin’s signal line showed growth. 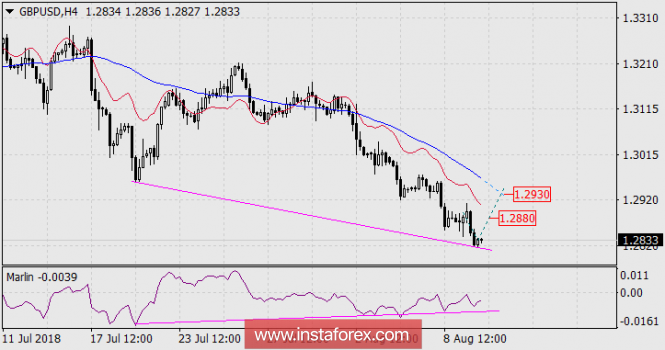 The support for the trend line at 1.2785 has not yet been worked out, formally the price tends to it, but much will depend on today’s important data on the UK. GDP for the 2nd quarter is expected to grow by 0.4%, at an annual rate of 1.3% against 1.2% earlier. Business investment is expected to grow by 0.3% against -0.4% in the previous quarter. Industrial production for June could show an increase of 0.4%, but due to the previous fall in May by -0.4%, the annual growth in Industrial Production could slow down to 0.7% from 0.8% earlier. The commodity trade balance for June is expected to improve from -12.4 billion pounds to -12.0 billion. But British data may disappoint. In this case, the downward trend line in the region of 1.2785 will be worked out. The further prospects for the decline are far, the next significant goal is 1.2275 – support of the trend line of the channel at weekly TF.