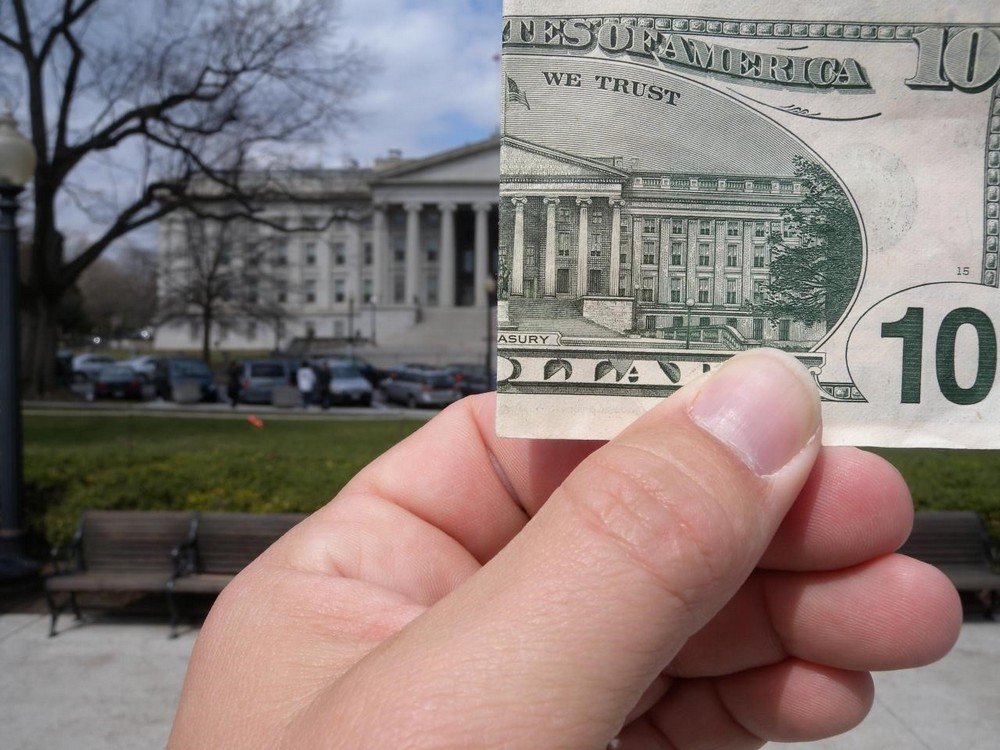 Forex traders should have an understanding not only of currencies, but also of other financial instruments. Futures, options, stocks and bonds are closely related to changes in exchange rates. In analytical reviews, you can often find references to the yield of government bonds of various countries. Interest rates in all economically developed countries are at a very low or zero level and practically do not affect currency fluctuations.

In such conditions, the role of the yield on government bonds increased. The cost and yield of government bonds objectively reflects the state of the economy and finance. These securities are freely traded on stock exchanges, and the change in their indicators is interconnected with the international currency market. This is especially noticeable in the absence of other macroeconomic factors and news.

Any state has a budget, that is, income and expenses. All state activities require fixed costs, and money for these costs comes from taxes and other sources. If at some point there are more expenses than income, then the financial authorities of the state borrow money. This is exactly the same loan that ordinary borrowers take from banks. Only the public debt is formalized in the form of securities – bonds. 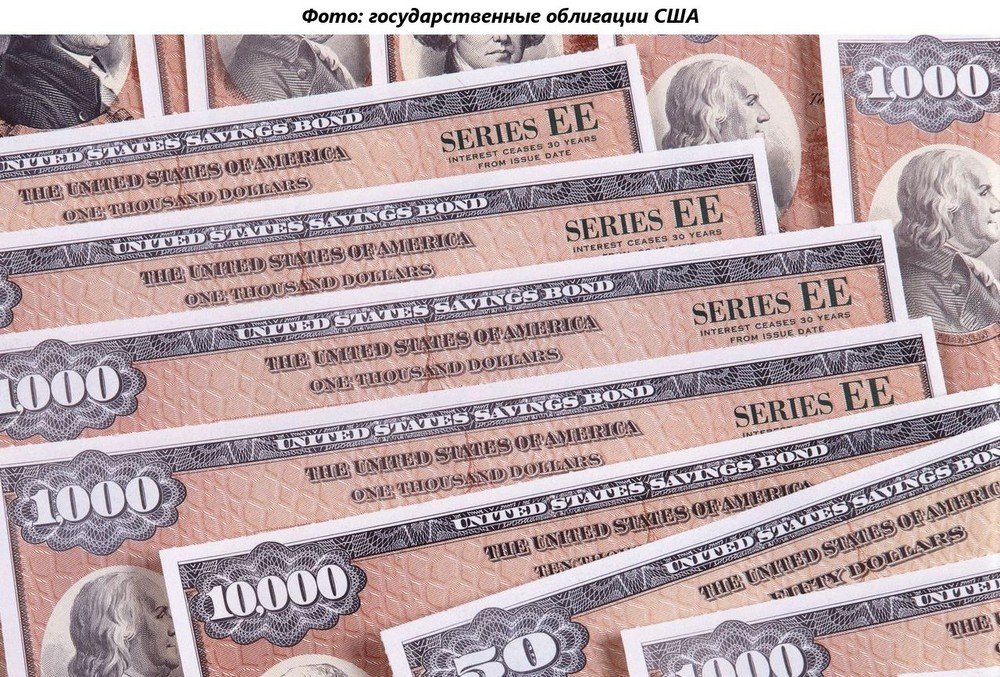 Anyone can buy the bonds, and once issued, they are freely traded on the market. The state pays a certain percentage on bonds. Usually, the volume of the issue of bonds is determined by the Ministry of Finance, and the issue into circulation is carried out by the Treasury. The state guarantees the redemption of bonds at par, so they are always in demand. Americans call these securities Treasury, and Europeans call Bund.

The issue of government bonds is designed to solve a number of problems. The main one is covering the budget deficit and short-term cash gaps. The state can raise funds to finance targeted projects, pay off other debts, and support social programs. Issuing bonds, as attracting money from private investors, is considered a better vehicle than issuing money or borrowing from the Central Bank. In addition, government debt securities are used as a means of regulation in monetary policy.

Depending on the purpose of the bonds, they can be issued for various periods from several weeks to 30 years. They can be conditionally divided into three types – short-term up to three years, medium-term up to ten years and long-term over ten. The most common papers in the West are three and ten years. They influence the charts of Forex and other instruments. Methods for paying bond yields also vary. There are fixed income and floating income securities.

Correlation of government bond yields and the Forex market

Before the 2008 crisis, the most important factors for major currencies were interest rates and yields on two and three-year bonds. The more profitability one could get in a country, the larger amounts of money flowed into that country and its currency grew. In recent years, the impact of interest rates has decreased, and ten-year bonds are more influencing exchange rates. The relationship between the dollar exchange rate and the return on American safe assets, that is, ten-year Treasuries, is especially strong. 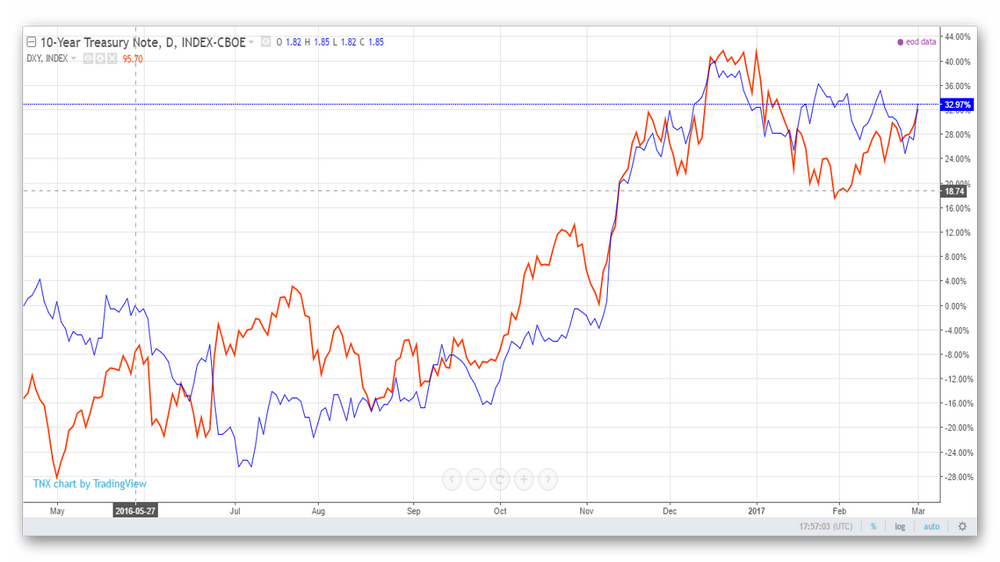 Ten-year bonds reflect inflation expectations. The main criterion is profitability, not cost. If profitability rises, then inflation expectations rise. This information influences the actions of the Central Bank. The intensification of inflation causes an increase in rates and appreciation of the currency. With a fall in bond yields, the Central Bank will tighten monetary policy, which will lead to a decrease in the exchange rate of the national currency.

If you compare the graph of the dollar index and 10-year Treasuries, you immediately see a strong correlation. However, currency pairs are traded on the Forex market, so it is important to compare the bond yields of the two countries. The simplest example is the euro and the dollar. German bonds have the greatest influence on the euro exchange rate, so you should compare the graphs of the movement of Treasury and bond yields.

Russian companies from the detailed rating of Forex brokers set the purchase price and the sale price of a currency pair – the spread. The difference in bond yields between the two countries is also called the spread. This value is used as an indicator. The spread is always positive for one country and negative for another. When the spread widens, the currency will rise, and when the spread narrows, it will fall. In recent years, this is clearly seen on the example of the dollar rate against the euro and the Japanese yen. Over the past three years, the dollar has grown significantly against these currencies. The yields on German and Japanese bonds are quite stable, while American ones are constantly growing.

Using the yield spread in forecasting

For any currency pair, you can analyze and compare the yield spread of government bonds. This information is published on specialized sites. For a more accurate analysis, you can calculate the spread yourself using the online charts from TradingView. To do this, it is enough to open in one window two graphs of the yield of bonds of two countries. You need to analyze not the value at the moment, but the dynamics of the spread change. Although it is believed that bond yield analysis is only suitable for long-term trading, it can be used for any time frame. 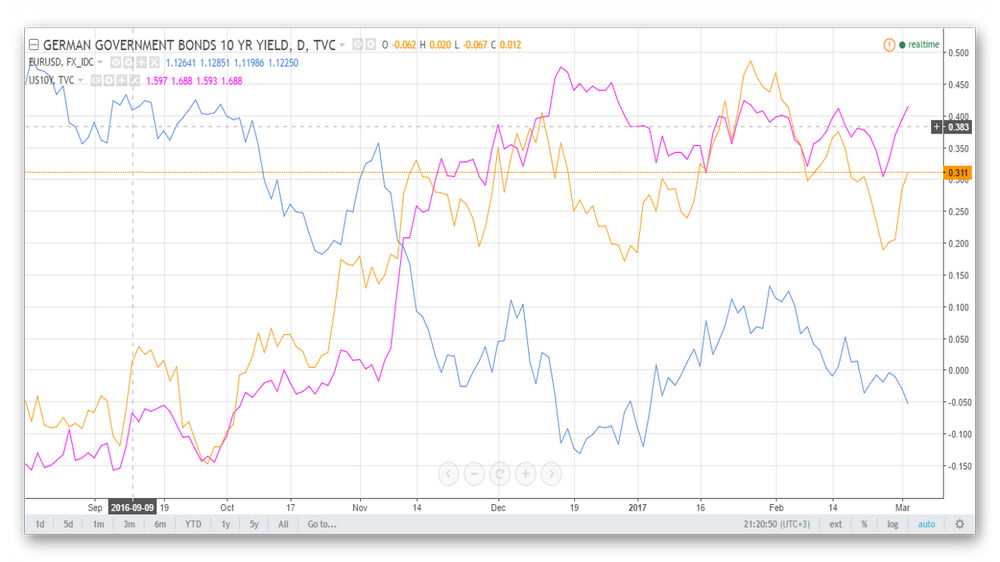 In the dynamics of profitability, there are also short-term trends, pullbacks and corrections. You just need to look at a slightly higher timeframe than for a currency pair. So, to trade on the hourly chart, you should analyze the change in profitability over several days. For the daily chart, we analyze the changes over several weeks. It should be borne in mind that the analysis of bond yield spread is only one of the tools that works in conjunction with others.