Fundamental Analysis of EUR/CAD for July 6, 2018

EUR/CAD has been slightly bullish recently trying to break above 1.5350 area with a daily close. CAD has been the dominant currency in the pair recently which is expected to continue further as per market condition and context of economic reports published.

As of the current scenario, ahead of the CAD high impact economic reports, EUR has been quite mixed with the results though capable of sustaining the bullish momentum but not quite to stop an impulsive counter. To sum up, if CAD economic reports perform well today with better than expected or equal as expected then CAD is expected to continue its gains over EUR further in the coming days.

Now let us look at the technical view. The price is currently residing above the 1.5350 area but inside the Kumo Cloud resistance which does provide a certain indication of price pushing lower in the coming days. Apart from it, the price has developed certain Bearish Divergence pressure which is also providing an indication of further bearish momentum in the pair. As the price remains below 1.55 area with a daily close, the bearish bias is expected to continue further. 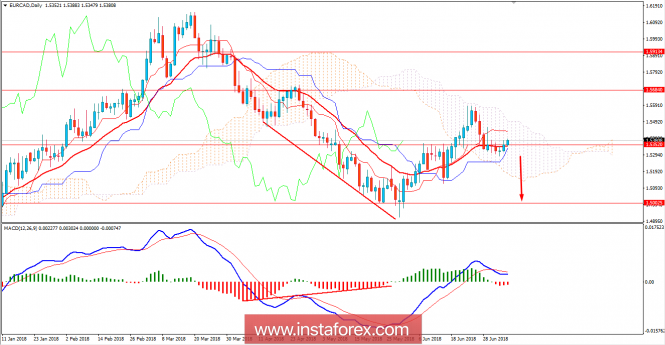