EUR/GBP has been quite volatile and corrective after breaking above the 0.8850 with a daily close recently. Though the price has created higher lows, breaking out of the longer range between 0.87 and 0.8850, the impulsive bullish pressure is still not seen in the market.

Recently, EUR has been struggling for gains amid economic reports while ECB President Draghi has been quite optimistic about economic prospects. The market is currently quite indecisive. Today, ECB President Draghi spoke about the prospects of economic development until the year end. His speech may contribute to further strengthening of EUR. Ahead of the Euro group meeting and ECB Monetary Policy Meeting Accounts, the pair is likely to trade with higher volatility. Correction is also expected in the pair. EUR is expected to extend its strength in the coming days.

On the other hand, GBP has been quite mixed amid the recent economic reports. Indeed, UK GDP came in at 0.3%, Manufacturing Production increased to 0.4% from the previous value of -1.3% but failed to meet the expected 1.0%, and Goods Trade Balance remained unchanged at -12.4B which was expected to increase to -11.9B.

As for the current scenario, both currencies in the pair are struggling amid mixed recent economic reports and events. However, EUR is quite optimistic because of further economic developments. On the other hand, GBP has been weighed down due to the recent political jitters in the UK government. Thus, GBP is expected to weaken further against EUR in the short term.

Now let us look at the technical view. The price is currently residing above 0.8850 area which is quite nearer to the descending channel it has been following since September 2017. Though the price is still volatile, dynamic level of 20 EMA is acting as support, breaking above strong resistance of 0.8850. The bullish pressure is currently the strongest and expected to push the price higher with a target towards 0.90 area in the future. As the price remains above 0.8850, the bullish bias is expected to continue further. 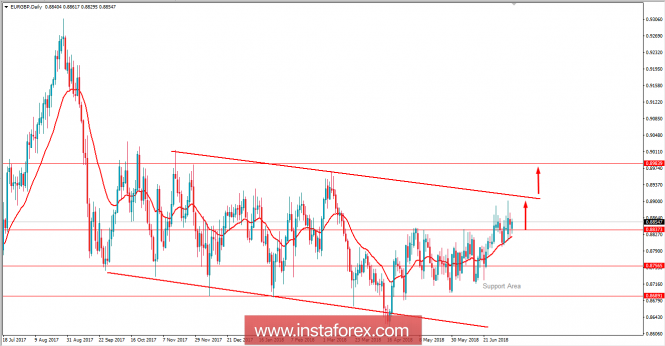