Fundamental Analysis of EUR/JPY for July 9, 2018

Today at the first phase of the ECB President Draghi’s speech on recalibration of the Euro Monetary Policy stance after September this year. The speech was quite optimistic discussing the Employment growth, Unemployment Rate stability in recent months and annual growth is expected to be 2.1% in 2018 and 1.9% in 2019 and 1.7% in 2020. Though Euro is currently facing some global challenges like Trade War and BREXIT situations, overall EUR is growing consistently without much deeper pullbacks in the process. The next speech is going to be held shortly which is also expected to be hawkish for the upcoming Euro economic growth.

On the other hand, today JPY Bank Lending report showed an increase to 2.2% which was expected to be unchanged at 2.2%, Current Account report was published with a slight decrease to 1.85T from the previous figure of 1.89T which was better than expected figure of 1.18T and BOJ Governor Kuroda spoke about the economic development which was quite optimistic for further gain on the JPY side as everything is falling in as planned.

As of the current scenario, both Euro and Yen are currently quite optimistic and positive with the economic results which are expected to inject certain volatility and indecision in the market. Though certain JPY gain may be observed along the way EUR is expected to sustain its gains for the long-term.

Now let us look at the technical view. The price is currently showing certain bearish pressure in the pair now after consistent bullish momentum leading the price above 129.50 area with a daily close. The price has formed Bearish Regular Divergence in the process along with 20 EMA distance which is expected to pull the price lower towards the mean in the coming days. As the price remains above 129.00-50 area with a daily close, the bullish bias is expected to continue further with a target towards 131.50. 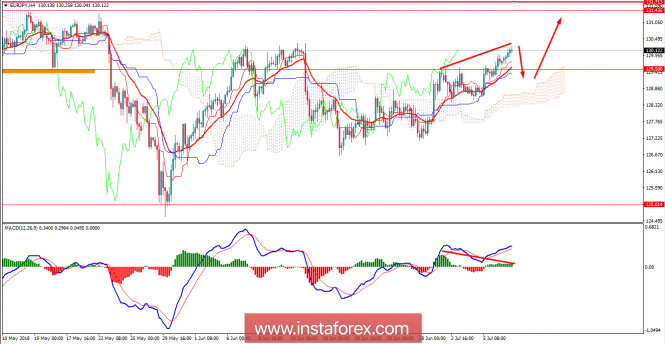