EUR/USD has been quite bullish the recent price action after a bounce off 1.1750 again recently. Despite the recent worse-than-expected economic reports, today USD gained good momentum amid expectations for upbeat economic data, while EUR is still struggling.

Menawhile, the trade war has been causing the market volatility nowadays which is expected to lead to uncertain momentum in the future. Though the US started the trade war, it’s economy is also expected to suffer its consequences in the medium term. USD has been trading slightly better than expected in certain economic reports recently, while EUR has been quite mixed. USD is set to defend gains in the coming days. However, the question is still open how much endurance the momentum could hold.

Now let us look at the technical view. The price is currently residing at the edge of 1.1720-50 area from where it is expected to sink lower towards 1.1550 support area in the coming days. Though the price has been quite bullish since last Friday, USD has been outperforming EUR in light of economic data. The bearish pressure is expected to gain stronger. As the price remains below 1.1720-50 area with a daily close, the bearish bias is expected to continue. 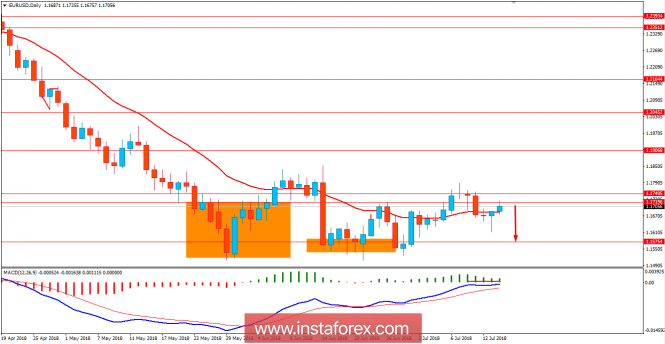